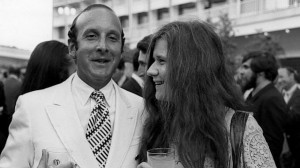 As a journalist I understand that when you’re writing about a topic that others have already covered you have to find a new angle to make people want to read what you wrote. Unfortunately for some writers that turns into focusing on shocking details rather than the overall idea and Clive Davis’ new memoir The Soundtrack of My Life exemplifies this issue.

Davis, who has won five Grammy Awards and is a member of the Rock and Roll Hall of Fame, is probably one of the most impressive figures in the history of the record business and has discovered and/or guided the careers of some of the biggest names in music including Whitney Houston. He was President of Columbia Records from 1967 to 1973, was the founder and president of Arista Records from 1975 through 2000 until founding J Records, was the Chairman and CEO of the RCA Music Group (which included RCA Records, J Records and Arista Records) from 2002 to 2008, Chairman and CEO of J Records and Chairman and CEO of BMG North America. Currently Davis is the Chief Creative Officer of Sony Music Entertainment and plays a part in the careers of heavy hitters including Aretha Franklin, Rod Stewart, Alicia Keys, Christina Aguilera, Carlos Santana, Kelly Clarkson, Leona Lewis and Jennifer Hudson.

Bottom line: Clive Davis is a big fucking deal. Yet all anyone can write about is that “the biggest revelation of his new memoir” is that 80-year-old Davis finally admits to being bisexual. Although he has been married and divorced twice Davis has never before publically addressed his sexuality but in a five-page section toward the end of the book, which hit stores yesterday, he writes that he first had a sexual encounter with a man during the era of Studio 54 which led to subsequent relationships with men over the years. He did not name any names.

While it was clearly Davis’ choice to put this information in the memoir, I find it irritating that there has been so much emphasis on those five pages. Yes, the information is both shocking and new which is why people are writing about it but I just wish that journalists could find other hooks – especially considering most of the book is devoted to his interactions with a wide range of artists over nearly five decades.

And to me that’s the good stuff. The detailed discussions Davis had with his artists and the choices that hugely impacted their careers:

-Davis attempts to talk Bob Dylan out of naming his new album Nashville Skyline (“It was not in any literal sense a country album”).
-He told Bruce Springsteen’s manager at the time, Mike Appel, that 1973’s Greetings from Asbury Park, N.J., needed a few more radio-friendly songs – which resulted in Springsteen adding “Blinded by the Light” and “Spirit in the Night” to the finished record.
-Davis spends an entire chapter talking about Whitney Houston in which he recounts their early collaborations and his trepidations about her acting in The Bodyguard.
-He reprints a letter he wrote to her after seeing an emaciated Houston perform at the 2001 Michael Jackson tribute concert and reveals a one-on-one intervention with her that he attempted at his Pound Ridge, New York, home. (Houston, he writes, was in “complete denial” about her excesses). And he recounts the shock of getting that momentous phone call, just before his annual pre-Grammy party, that Houston was dead.
-Davis also goes in-depth on his clash with Kelly Clarkson and her management prior to the release of 2007’s My December – he recruited focus groups to offer opinions on a batch of the album’s songs, with very negative results.
-He also talks about his surprise at learning that Rob and Fab didn’t actually sing on the Milli Vanilli album. (“People thought I was in on this elaborate scheme,” he writes).
-Davis also offers up his own account of how he had to, in his words, “relinquish Arista,” the label he started and had turned into a huge success, but was given $150 million to launch his J Records and its biggest star, Alicia Keys.

Today’s latest Clive Davis news is Clarkson posting a letter on her official site accusing him of bullying her:

“First, he says I burst into ‘hysterical sobbing’ in his office when he demanded ‘Since U Been Gone’ be on my album. Not true at all. His stories and songs are mixed up. I did want more guitars added to the original demo and Clive did not. Max, Luke and I still fought for the bigger sound and we prevailed and I couldn’t be more proud of the life of that song. I resent him dampening that song in any way,” writes Clarkson.

But there’s more. Yes, she did cry in his office, she admits, after letting him listen to another future hit, “Because Of You.”

“I cried because he hated it. …This was devastating coming from a man who I, as a young girl, considered a musical hero and was so honored to work with. But I continued to fight for the song and the label relented. And it became a worldwide hit. He didn’t include that in the book.”

Will Davis’ book cause more controversy and conversation? Time will tell.