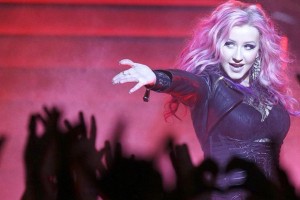 It’s been quite a year for Christina Aguilera so far and I mean that in the most positive way possible. Although there is no question that she has an incredible voice – a range that spans four octaves – she hasn’t always been my favorite “personality.” She started as a little blonde pop princess singing about genies, then turned herself into raven-haired Xtina, then took herself “back to basics,” starred in Burlesque and then became one of the coaches on The Voice. Although she has a lot to teach, there were a few seasons of The Voice where she was bitchy, unfair and condescending. Not anymore.

In February she went on The Tonight Show and took Jimmy Fallon to school when they played a game called “Wheel of Musical Impressions.” Aguilera’s impression of Britney Spears and Shakira was spot-on and hilarious and her overall performance as a guest showed that not only can she maneuver her voice any way she wants, she can also be funny and charming while she does it. In the last two months that clip has racked up over 32 million views on YouTube so if you haven’t seen it, go to YouTube right now.

Over The Voice’s eight seasons, Aguilera has taken two breaks as a coach and after giving up her chair to Shakira and Gwen Stefani (both breaths of fresh air) on seasons six and seven, she came back this season ready to work. Not only does she arguably have the best team this year, she has also been an outstanding coach as she put her own ego and agenda aside to really dig in and help the members of her team. It’s nice to see someone with that much talent and prestige –five Grammy Awards, one Latin Grammy Award, a star on the Hollywood Walk of Fame, over 50 million albums sold worldwide and number 58 on the Rolling Stone list of the 100 Greatest Singers of All Time – give back to people who really look up to her.

Lastly, Aguilera made her country music debut last night on Nashville as Jade St. John – a pop star crossing over into country music. Based on what I saw last night, Aguilera has clearly been working on her acting skills because even though she was kind of playing a version of herself she was both alluring and believable. She also performed a song so catchy and fun that I played it on my radio show before it even aired on television. Download “The Real Thing” immediately.

Hopefully Aguilera will continue her hot streak of awesome by choosing interesting projects and staying out of the tabloids. For the next few weeks she’ll be on two networks – ABC and NBC – as she is slated to appear on the next three episodes of Nashville and of course she’ll be on television each week until season eight of The Voice ends on May 19. Good luck Christina and keep the hits coming!