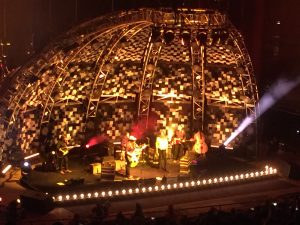 On November 9, 2015, I wrote about Chris Stapleton for the first time after seeing him perform with Justin Timberlake on the Country Music Awards. Prior to that performance I had never heard of Stapleton but as soon as he sang the first few words of (what I later learned was) “Tennessee Whiskey,” he grabbed my attention and never let go. Who was this guy with the cowboy hat, huge beard, and long hair dressed in all black singing with Timberlake? Where the hell did he come from? After watching the CMAs, I did some research and found out that Stapleton was the go-to songwriter for some of country music’s biggest names including George Strait, Tim McGraw, and Kenny Chesney and even pop rock singers like Adele, Peter Frampton, and Sheryl Crow.

Lucky for us music fans, after years of writing music for other people, Stapleton decided to record his own album, Traveller, and release it on May 5, 2015. Over the last two years the album reached number one on the Billboard 200 and earned a double platinum certification. Additionally, Stapleton was awarded Album of the Year and Male Vocalist of the Year by the Country Music Association Awards and the Academy of Country Music Awards. He also won Grammys for Best Country Album and Best Country Solo Performance. Five days ago, at this year’s Billboard Music Awards, Traveller took home the honor of Top Country Album.

On May 5, 2107, exactly two years after the release of Traveller, Stapleton released From A Room: Volume 1. My two favorite songs so far are “Second One To Know” and “Broken Halos.” Once again, he has managed to write and record songs that make the listener feel like they are part of his journey. That’s the magic of Stapleton – he’s an excellent writer who puts emotion behind an extraordinary gravelly voice and a lethal guitar. He’s a badass who doesn’t know he’s a badass. He also sings on stage every night with his wife – actually from what I’ve seen, and if you look closely you’ll see it too, he’s usually singing to her.

Two nights ago, Stapleton played at Red Rocks and I was lucky enough to be there. Nine years had passed since I had seen live music played at the iconic venue tucked into the small town of Morrison, Colorado and this was one hell of a welcome back show. Stapleton performed in front a sold-out crowd at one of the most famous music venues in the country and he nailed it. Turns out he’s just as talented as a live performer as he is a songwriter and recording artist. Although he uttered only a few words to the crowd throughout his two-hour set, when he did speak he was kind, gracious, and funny. He even sang/spoke as he introduced his band. But a whole lot of talking wasn’t really necessary for a guy whose songs are an incredible juxtaposition of heartbreaking storytelling, outlaw guitar, and road worn words. He sounds like he’s from another decade – like he should be playing with outlaw musicians like Johnny Cash, Willie Nelson, Waylon Jennings, and Merle Haggard. No wonder his tour is called the All-American Road Show Tour.

Stapleton is without a doubt one of the most authentic and talented artists I’ve ever seen live – he plays with so much soul, grit, and range that I can’t believe it took him so long to record his own music. Over the years I’ve been fortunate enough to see a few legends live including the Rolling Stones, Aerosmith, Tom Petty, Eric Clapton, Prince, the Beastie Boys, Bob Dylan, Toots & The Maytals, Billy Idol, Van Halen, the Foo Fighters, AC/DC, ZZ Top, Elton John, Billy Joel, Axl Rose, John Mellencamp, Motley Crue, and LeAnn Rimes and Chris Stapleton is right up there with them. Although he’s only recorded two albums of his own, he absolutely belongs on that list of legends. He’s that good. Thank you to my significant other for making Wednesday night happen. I will never forget that show.