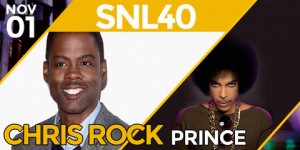 I hardly watch Saturday Night Live anymore. Why? Well the short answer is that it kind of sucks. At 31 years old I’m used to watching the years of Chris Farley, Adam Sandler, Chris Rock, Mike Myers, Dana Carvey, David Spade, Jimmy Falon, Tina Fey, Amy Poehler, etc. But now the cast is made up of unknowns who I don’t think are very funny and the skits and jokes just aren’t what they used to be. Of course a lot of the names I just mentioned were unknowns when they started with SNL but that changed very quickly. This group – not so much.

But when my cousin brought to my attention that both Rock AND Prince were going to be gracing the SNL stage I knew I had to watch. All week I was imagining what I was going to write: “Prince & (Chris) Rock Roll Through SNL” or “Royalty Returns.” The possibilities were endless!

I’ve always been a fan of Rock – his high-pitched delivery is hilarious, he is not afraid to walk the line of “appropriate” or “too soon” and his background is in stand-up. I mean how many times have you quoted or heard someone quote one of his many famous lines: “As a father, you have only one job to do: Keep your daughter off the pole! If she’s dancin’ on a pole, you fucked up!”

Anyway, back to SNL from two days ago. The unparalleled Rock, who, for the first time since he left the show in 1993, was back hosting and I’m sure people were both excited and nervous.  In fact I’m assuming he made every current cast member swoon and/or cry for their mothers when he kicked off the show with that killer eight-minute monologue.  How the hell were they going to follow that kind of comedic greatness?

Although I was secretly hoping to see Rock and Prince interact or at least Rock do some kind of parody of Prince, that didn’t happen. What did happen was Prince, like Rock, rewriting the rules. Instead of doing the usual two-set appearance, our favorite purple singer, along with his badass rock and roll girl group 3rdEyeGirl, performed an eight-minute medley of songs from one of his new albums PlectrumElectrum.  (Apparently eight was the magic number that night). Taking place approximately 30 minutes into the show, the set began with Prince on keyboard before moving over to guitar. Sporting a Jimi Hendrix-esque afro and three-lensed sunglasses, Prince looked like the rock star that he is and his rad girl band, clad in leather and studs, looked like rock stars themselves.

For those who were alive at the time (or have searched YouTube), you have seen Prince’s memorable SNL debut 33 years ago when he sang “Partyup.”  This was before Purple Rain so hits like “Let’s Go Crazy,” “I Would Die 4 U,” “Baby I’m a Star,” “When Doves Cry” and of course the title track, didn’t exist yet.  At age 56 he is still making music, performing, shredding his guitar and breaking new ground. He is amazing.

Although it’s a little unfortunate that SNL, which is impressively celebrating it’s 40th year, needs to bring in big guns like Rock and Prince to garner ratings, I’m so glad they did. The next host/musical guest pairing will be Woody Harrelson and rapper Kendrick Lamar. Although I have no idea who Lamar is, I’m sure Harrelson will be a fun host. At the same time, I don’t envy their position following what we witnessed on November 1.