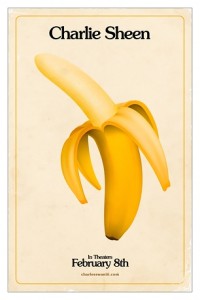 Apparently Sheen was hired to star in Roman Coppola’s upcoming film called A Glimpse Inside the Mind of Charles Swan III which is about a graphic designer who goes through a breakup that makes his life spiral downward in a hurry. Sheen plays the graphic designer (side question: Why does he share the name with every character he plays?) and the release date of the movie is February 8.

It has been reported that the new poster “specifically represents Sheen’s character” – what the hell does that mean? And I guess there are other posters that show objects which are supposed to symbolize the characters of his co-stars including Jason Schwartzman, Bill Murray, Aubrey Plaza and Patricia Arquette.

What the hell kind of movie is this? And whose idea was it to have such vague posters? Clearly whoever is in charge of marketing knows what they’re doing because the ad caught my eye as I’m sitting here writing about it. All press is good press, right?