While all the Star Wars fans out there have been loving Carrie Fisher for decades, there are some people in this galaxy who are more recent fans of her writing than her gold bikini and ear buns. I am one of those people. 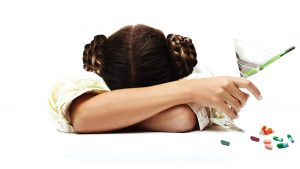 Although my significant other’s nickname brings more Star Wars references into my life than I would otherwise have, I’m more interested in Fisher’s writing than her iconic movie character. After her sudden passing in December, my PO box was inundated with magazine articles about Fisher’s life. While learning about her background via those articles was interesting, what caught my eye the most were the excerpts and quotes from a few of her books that were published in these magazines. The more I read, the more I came to the realization that Carrie Fisher is funny! So, I purchased the New York Times bestseller Wishful Drinking.

Published in 2008, almost 10 years prior to her untimely death, the book is (surprisingly) full of information about her upbringing and rather than her time on the set of the various Star Wars films. Dedicated to her daughter Billie Lourd, the first few pages of the book feature newspaper, magazine, and tabloid headlines chronicling Fisher’s crazy life. As the daughter of two movie stars, Eddie Fisher and Debbie Reynolds (known in the 1950s as “American’s Sweethearts”), Carrie’s existence was literally recounted by the media since birth. The headlines range from “Eddie Fisher Leaves Debbie Reynolds And Two Infants For Elizabeth Taylor” to “Princess Leia Overdoses At Cedars-Sinai.” While Fisher clearly read gnarly headlines about herself for years, I thought it was funny that she started her book with these clippings. It definitely set the tone for what would end up being an extremely sarcastic, darkly funny, and borderline self-deprecating book.

Fisher jumps right in by unapologetically explaining that her parents “were professionally committed to sticking out” so most of time she found herself “sticking out right along with them.” So goes the life of celebrity offspring. She describes herself as a “product of Hollywood inbreeding” and even includes a chart of her family tree (if you can even call it that) which depicts her parents’ many marriages and resulting children. Actually, it’s more like a tangled, sprawling tree that has so many twisty branches it’s almost a tree monster.

Throughout the book, she unabashedly discusses her drug and alcohol addictions, her experience with electroshock therapy (apparently her memory is shot), her marriage to Paul Simon, her time in a mental institution, and how her family is the main culprit for all her issues. An interesting aspect that Fisher continually points out is how normal her brother Todd turned out compared to her. In fact, she describes him as the “hogger of all the sanity available in [their] freak family.”

A few of my favorite quotes:

“I don’t know the difference between movies and real life.”

On Paul Simon: “I loved this man’s lyrics. They were one of the reasons I fell in love with words.”

“If my life wasn’t funny it would just be true, and that is unacceptable.”

When asked by her daughter Billie if she is related to Rhys Tivey: “You’re related by scandal.”

“It was complicated to go out in public with my mother because she was very famous. She belonged to the world…In a way, my mother was an event.”

After reading her father’s novel – Been There, Done That – which Fisher describes as an account of all the women her dad slept with, she said: “I wanted to get my DNA fumigated.”

“When you are a survivor, in order to be a really good one, you have to keep getting in trouble to show off your gift.”

“All of my friends made fun of me because they said the title of the film sounded like a fight between my original parents – Star Wars!”

“Forty-three years ago, George Lucas ruined my life. And I mean that in the nicest way possible.”

“It’s important to be able to distinguish the difference between a problem and an inconvenience.”

“I heard someone say that I didn’t have to like meetings, I just had to go to them. Well this was a revelation to me! I thought I had to like everything I did.”

Describing herself while trying to get sober: “Quick to excite, to agitate, to engage, to anger – I was heading straight up into the rafters of my overly good or bad time.”

Carrie to Billie: “If you want to be a comic, you have to be a writer. But don’t worry, you have tons of material.”

“I want to get old with someone – not because of them.”

“Resentment is like drinking a poison and waiting for the other person to die.”

“Saying you’re an alcoholic and an addict is like saying you’re from Los Angeles and from California.”

I can see why Wishful Drinking is a New York Times bestseller – it’s witty, raw, brazen, and includes an abundance of juicy details about someone who nerds have been fantasizing about for decades. Fisher is an excellent writer and because of her ability to write as (I imagine) she talks, the 163 pages flew by. If you’re a fan of Star Wars, of course read it. If you like celebrity scandal, definitely jump right in. If you appreciate someone has seen a few things and been a few places providing the titillating details in a prolific way, this book is definitely for you. For Fisher, honestly is definitely the best policy.