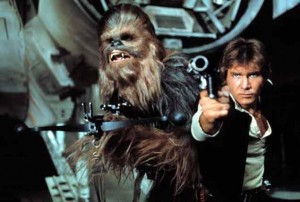 Before I begin writing about Star Wars let me just say that I am so far from a sci-fi loving Star Wars nerd it’s not even funny. In fact I didn’t see any of the original three movies until I was in college and my friend Dave Mescon forced me to watch them on VHS. Yeah I said VHS.

When I asked why it was so important for me to see these movies Dave talked about how they are legendary, epic films that are constantly being referenced and it was my duty as a person who loves pop culture to watch them. Fine. We sat down and watched all three of the originals and to my surprise and his credit I actually liked them. I couldn’t believe how young and attractive Harrison Ford was in the films and I was relieved that there was actually a storyline rather than a bunch of geeks swinging around light sabers. Also, I was surprised at how many names/objects/lines I recognized just from other movies and people referencing these movies over the years. For example I knew which character was R2-D2 and I recognized the “Luke I am your father” line (thanks to Chris Farley’s performance in Tommy Boy of course). Also, I do have a special place in my heart for Wookies 🙂

But regardless of all that I still didn’t get why this franchise was such a big deal. Dave said that the technology George Lucas used at the time was extremely advanced and ahead of its time for the late 70s and early 80s and that it was a sci-fi movie that everyone loved. The film series was so popular that it spawned a media franchise outside the film series called the Expanded Universe including books, television series, computer and video games and comic books. These items kept the franchise active between films and are still providing the same function because 36 years later Star Wars still maintains its seemingly endless popularity.

Originally released on May 25, 1977, the very first film in the series became a worldwide pop culture phenomenon and was followed by two sequels which were released at three-year intervals. 16 years after the release of the trilogy’s final film, the first in a new prequel trilogy of films was released, also at three-year intervals, with the final film of the trilogy released on May 19, 2005.

In October 2012, The Walt Disney Company acquired Lucasfilm for $4 billion (that’s billion not million) and announced that it would produce three new films, with the first film, Star Wars Episode VII, planned for release in 2015. While reactions to the original trilogy were and remain mostly positive, the prequel trilogy received more mixed reactions. That being said all six of the main films in the series were nominated for or won Academy Awards. All of the main films have also been box office successes, with the overall box office revenue totaling $4.49 billion, making Star Wars the third-highest-grossing film series of all time.

And now for the most recent news: Today Carrie Fisher announced that she will reprise her role as Princess Leia in the new series of Star Wars movies, making her the first cast member from the original films to confirm that she has signed on. Plenty of past Star Wars rumors have been swirling since Disney bought Lucasfilm last fall announced a new trilogy of movies: Mark Hamill is in talks to return as Luke Skywalker and Harrison Ford has expressed interest in reprising his role as Han Solo, and Ian McDiarmid, who played Emperor Palpatine, hasn’t ruled out a return. Ewan McGregor, who played Obi-Wan Kenobi in Episodes I-III, has said he’d be willing to make a spin-off based on his character.

Will these actors really commit to playing their characters again close to four decades later? How will Disney weave in their age and what they’ve been doing all these years? How will all the Star Wars geeks feel about a third trilogy? I would love to know – and in the meantime feel free to send me a lightsaber or one of those reversible hoodies!