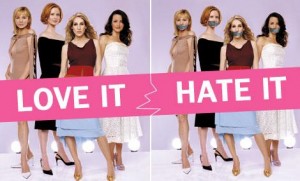 Even though the Sex and the City television series ended in 2004 and the two movies were released back in 2008 and 2010, the women of this show, the fashion, the storylines, their love lives and all the details still resonate with women of all ages and probably always will. It’s rare that I run into a female that doesn’t like SATC or hasn’t seen all the episodes and movies at least once. But for some reason there has been some recent backlash about SATC which I’ve decided to address.

First of all, it’s easy to discriminate and criticize in hindsight – that’s true of anything whether it’s pop culture or not – so I’m wondering why all of the sudden people are now publishing their opinions on the show and specifically the character of Carrie Bradshaw. It can’t just be that TBS and E! rerun episodes constantly.

On May 1, BuzzFeed released an article called “27 Ways You Are Not Carrie Bradshaw” which completely makes fun of the character’s wardrobe, the idea that she could not live the way she does by writing one column a week for a newspaper (so true), the fact that she is high maintenance and impossibly technologically ignorant, how she doesn’t understand how to handle a bank account, her weird catch phrases about love, her inability to get rid of clothes without her friends’ opinions, etc.

While some of these examples are hilarious and true, others are completely unfair and taken out of context. I’m sure the first time people heard the line, “Maybe some women aren’t meant to be tamed. Maybe they need to run free until they find someone just as wild to run with,” it resonated. Now that you’ve seen the episode 97 times, it might come off as dramatic.

On December 4 Elle magazine wrote an article called “How I Learned Carrie Bradshaw Was Full of Sh*t” which discusses how the writer initially thought the women of SATC were exciting and that she had a lot in common with Carrie Bradshaw i.e. they were both writers, a little kooky and were “free spirits who believed in love, not rules.” The she goes on to say that looking back (hindsight), she was very different than the character she admired and realized that Carrie wasn’t cool – instead she was “an idiot, a sucker and a really shitty modern woman.” The Elle writer went on to describe Carrie as “selfish, needy and made millions of women think it’s okay to wear giant flower pins for no reason.” But at the same time, gives the character credit for inspiring her to write publicly and finding her own voice.

People have to remember that Carrie Bradshaw is a character that author Candace Bushnell created and Darren Star, Michael Patrick King and HBO had to write scenes and dialogue for on a weekly basis. While her issues with technology are absurd, the first time you saw them on an episode it made you laugh – which was the point. It was supposed to be funny that she thought Aidan could see her via AOL instant messenger (yeah, the show it that old). And of course no human in the world could afford to buy designer shoes and outfits on a freelance weekly newspaper columnist budget – trust me I know – but that’s not the point. People need to not take these shows and characters so seriously and remember that although SATC is a significant piece of pop culture history, these people aren’t real and the show is meant to entertain.

For those who can’t differentiate between real people who are role models and characters that are flawed but well-written, then they need to get a grip on reality. Not every famous person is meant to be a role model. If they are on TV or in a movie their number one job is to entertain. End of story. Also, people need to remember that when SATC first came out (1998) it was absolutely groundbreaking. No show on television ever talked about sex and “taboo” subjects in such an honest way and no other show made these topics as approachable and fun.

That being said, here are 10 reasons to love and hate the iconic show that is SATC:

-Their lifestyles are completely unrealistic and too many people out there believe that if you live in NYC, that’s how your life will be.
-Carrie Bradshaw always puts herself first.
-Although all four women are great in their own ways, they are so different from one another that I have a hard time believing they could all friends.
-Some of the characters are so stereotypical it’s hard to take them seriously.
-Over the years the four women became very affected – obsessed with labels, brands and how things looked on the outside.

-The show broke every rule in the book in terms of sex, what women talk about with each other, what people in general will reveal about themselves, fashion, friendships, love and impressive television writing in general.
-While some episodes are ridiculous and full of moments that have no other value than to shock, other episodes still resonate with me even though I’ve seen them a million times. (I.e. Miranda’s mother’s death, the episode where Carrie and Aidan have their big fight, watching Charlotte have Carrie’s back in the movie when Big doesn’t show up, when Big and Aidan hang out together in the county, the soul mate episode, etc.)
-There are so many funny quotes that can be pulled from some of the episodes and movies – in fact there are a few I use all the time.
-Watching a show that features a writer as the main character is awesome.
-It reminds us that friends are the family we get to choose.