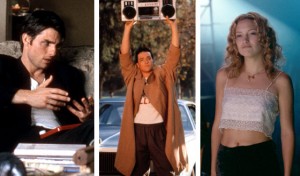 Even if you don’t know who Cameron Crowe is I’m pretty sure you’ve seen or least heard of one of his movies.  Are you ready for this list?  It’s awesome:

Fast Times at Ridgemont High (1982) – Crowe wrote a book while posing undercover for one year as a student at a San Diego high school.  Released in 1981 the book was called  Fast Times at Ridgemont High: A True Story which of course preceded the iconic movie that launched the careers of  Jennifer Jason Leigh, Eric Stoltz, Judge Reinhold, Phoebe Cates, Anthony Edwards, Nicolas Cage, Forest Whitaker and Sean Penn as the notorious Jeff Spicoli.

Say Anything… (1989) – This movie could have been just another boring teen drama that just so happened to star John Cusack (one of my favorite actors ever) but because Crowe is so brilliant the movie included layered characters that had more issues than just the prom.  It also features one of the most famous music scenes of all time – when Cusack’s character holds up a boom box over his head so the girl he loves can hear it through her bedroom window.  The song?  Peter Gabriel’s “In your Eyes.”

Singles (1992) – Centered around the relationships among a group of six friends in their twenties in Seattle, the film starred now heavy-hitters Bridget Fonda, Matt Dillon, Kyra Sedgwick and Campbell Scott.  Music functioned as its own character in this script as it was released at a time when grunge was ruling the charts.  In fact, the soundtrack became a best-seller three months before the release of the film.  During production Nirvana and Pearl Jam were so unknown that “Smells Like Teen Spirit” was originally on the soundtrack and members of Pearl Jam portrayed Dillon’s fictional band, Citizen Dick.  By the time the soundtrack was actually released Nirvana had become so big that “Spirit” had to be cut because it was too expensive to buy the rights.

Jerry Maguire (1996) – Although this one is about a sports agent rather than musicians, it made Crowe a bigger deal than ever.  Tom Cruise’s Jerry Maguire is a shark in a suit who one night writes a mission statement/memo indicating that agents should give their athletes more personal attention and take less commission.  Heartache and the notion that one decision can completely change the course of your life make this movie great.  Cuba Gooding Jr., Renee Zellweger and of course little Jonathan Lipnicki played their roles with unmatched charisma, drama and comedic timing which is why we remember so many lines from this movie.  Crowe has us at hello.

P.S. Even though this movie features sports agents and athletes the soundtrack is amazing – it has The Who (the beginning “Magic Bus” sequence sets the tone for the entire film), Bob Dylan and Bruce Springsteen, just to name a few.

Almost Famous (2000) – About a young journalist who goes on the road with a band for his first assignment for Rolling Stone, this movie is Crowe’s love letter to music.  It is autobiographical as Crowe started writing for Rolling Stone at age 16 and went on tour with bands like Zeppelin and the Allman Brothers.  Patrick Fugit starred as William Miller, the young writer who finds himself immersed in the world of sex, drugs, and rock ‘n roll and Kate Hudson co-starred as Penny Lane, a prominent groupie/ “Band-Aid.”  She is based on two women Crowe met in the 70s: Playboy Playmate Bebe Buell (who used to date Steven Tyler and is Liv Tyler’s mother) and Geraldine Edwards (who Crowe met while doing his Ridegmont High research).  I can’t say enough about this film – the idea of going on tour with a band and having the opportunity to write about them is incredibly alluring as it combines two of my favorite things to do.  This soundtrack includes everything from Led Zeppelin to Simon and Garfunkel and is crucial in telling Crowe’s amazing true story.

From these examples it is clear why Crowe is so good – because he writes what he knows. Most of his movies are based on experiences he’s had and people he’s met and as a result he creates characters that are extremely memorable and relatable.  It also helps that Crowe writes his screenplays with music in mind – a theme and passion that is clear throughout his life and subsequently his movies.

For all of those massive Pearl Jam fans out there (J.P. Crum and Justin Fields) get ready for his next big music-laced endeavor: Pearl Jam Twenty.  This documentary, which is slated for release in September of this year, is all about Pearl Jam and will have an accompanying book and soundtrack.  Crowe completed filming in April 2011, after using nearly 20 hours of footage of the band for the documentary.

Although I’m not an obsessed Pearl Jam fan like some of my buddies, I’ve always liked them and thought they were great live.  That being said I will say this: Anything Cameron Crowe creates I will see.  End of story.