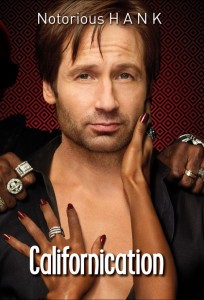 SPOILER ALERT! Tonight one of my favorite shows on television premiered and although what I love about the show is still the same (biting dialogue, great soundtrack, etc.) there are a lot of changes this season is bringing starting from episode one.

-Ballsy move fast forwarding the show five years. It worked for Desperate Housewives so why not Californication?

-Hank lives in NYC and he wrote another book (aptly titled “Californication”) which is in a bookstore near you!
-That’s not going to last unless they plan on changing the show’s name to “NewYorkfornication” which for some reason doesn’t have the same ring to it.

-Karen married someone else (good move since the back and forth between Hank and Karen was heartbreaking to watch).
-And the best part is that she’s not married to a random – she’s married to Richard Bates! Her former professor we met in season three who is actually a good match for her!

-Charlie is back to being agent extraordinaire.
-He’s driving a Porsche and wearing designer suits again – thank God. He’s way more fun when he’s a badass agent and not selling cars in the Valley.

-Becca is in college and has a douchebag boyfriend who reminds me of Ashton Kutcher. He couldn’t be more annoying.

-Marcy (still as inappropriate as always) and Charlie share custody of their “2.5 year old” son who for some reason isn’t talking yet.

Nice way to start the season – to say I’m intrigued is an understatement.