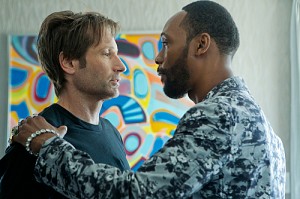 I just watched the season five finale of Californication and I was not impressed. In fact I was completely let down. On January 9 I wrote about how much I enjoyed the premiere and how promising the rest of the season was looking. Wow was I wrong.

Here is what happened and how everything went downhill:

1) The season began five years later which I thought was brilliant but then things just inched along. Each episode I would wait for something great to happen and then the credits would roll without anything happening. Instead most of the storylines were repetitive, boring and slow. Very un-Californication.

2) I was glad that Karen had moved on and then Bates went back to the bottle and apparently let his freak flag fly – with another man. Ridiculous and lame and once again Karen was put in a situation where she wanted to go back to Hank for the hundredth time. Snooze.

3) Becca, the badass ax-wielding spawn of Hank and Karen, might as well have not been a person this whole season. Instead of biting and intelligent dialogue we are used to getting from Becca she was overshadowed by her douche bag boyfriend who ended up being Hank Version 2.0. Unfortunately, like her mother, Becca can’t let the guy go. “Like mother like daughter” never had a worse ring to it.

4) As fun as it was trying to decipher what RZA was saying through that gnarly grill as he played an exaggerated version of himself, his character Samurai was predictable at best. A rapper who smokes weed, carries guns, has nice cars and wants to cross over into acting? Wow someone in the character development department was really flexing their creativity on that one!

And although I enjoyed the flashback episode where Hank and Samurai’s girlfriend/protégé Kali write a song together I was not a fan of her sleeping with seemingly everyone she came in contact with. Once again: predictable.

6) SPOILER ARERT! Other than Charlie literally taking a bullet for Hank, the end of the finale was awful. Bringing back Hank’s crazy NYC girlfriend? Really? That woman is nuttier than a fruitcake and not in the fun, entertaining way. And when is Hank going to learn that having “just one drink” with crazy people leads to trouble. Always.

Season six better be an improvement or this show needs to be put to rest. The substance and the soul have left the building and so have the clever lines. In prior seasons they were numerous but this season not so much. In fact there were only a few good ones I can recall:

“She’s the kind of girl a guy meets when he’s too young and screws it up because there’s too much living left to do.”

“Don’t come back without a dozen roses and your dick in a box.”

Who knows what the next season will bring but if it’s not old school Californication quality I hope they leave it on the cutting room floor.