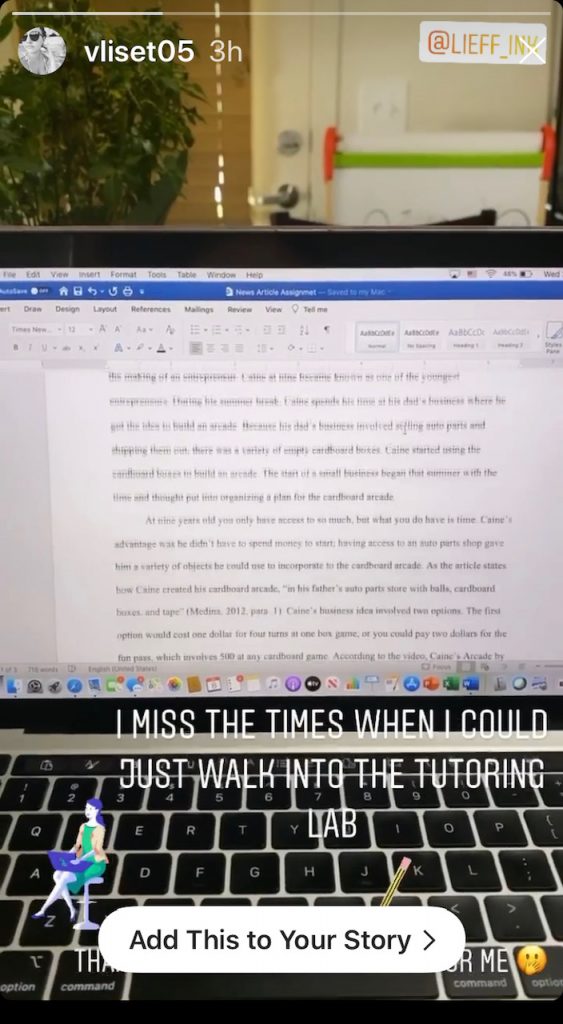 Six and a half years ago I started tutoring at Colorado Mountain College and one of my first students was Nidia Villalobos. She was a young mom who was the model student – excited to learn and extremely organized. Over the years we worked on all kinds of papers on a wide array of subjects for a variety of classes. Nidia always chose fascinating topics and articles to analyze. In fact, one of the most memorable papers we worked on together was a comprehensive research paper about prostitution that turned into an academic journal. While everyone else was writing about historically conventional topics, Nidia picked something new and exciting. Because Nidia always worked hard and was such a pleasure to work with, when she graduated (she now has three degrees) I was excited for her but was also sad that I wouldn’t be working with her anymore. In September 2018, I was thrilled to learn that she accepted a job at Vail Health. Little did I know that in May 2019, she would be there to meet our son because she was working at the hospital the day after he was born. Having two boys of her own, Nidia was excited for me too.

Fast forward to over a year later – today. Nidia tagged me in an Instagram post about missing the old days of being able to walk into the CMC tutoring lab. I thought, “same here,” but then wondered why she was working on a paper since she already graduated. Eager to find out what my motivated and intelligent former student was working on, but curious about why she was taking classes again, I asked her what was going on. She’s ready for another degree – this time in Business – of course. So for the first time in a long time, we got the band back together – via WebEx.

Her assignment was for an Introduction to Business class and, as expected, she chose an extremely interesting article to write about: “A Boy’s Fast Fame, Built of Cardboard and Tape” written by New York Times writer Jennifer Medina. The 2012 article discusses a nine-year-old boy named Caine Monroy who created his own arcade out of boxes and various materials found in his father’s Los Angeles auto parts shop. Caine’s creativity and motivation, even with a lack of customers, is an amazing story in and of itself. But what makes it even more fascinating is that a guy named Nirvan Mullick happened to walk into the auto parts store looking for a door handle and was mesmerized by Caine’s Arcade. Not only did he become this sweet kid’s first customer, he also made him famous. Mullick put together a movie about Caine and his arcade, posted about it on social media, attracted television reporters, and raised $250,000 for Caine’s college fund.

The newspaper writer in me sees this as one of the cutest human-interest stories ever. The PR person in me likes that the story reiterates how one person taking the time to give someone a little boost of publicity can change lives. The mom in me is brought to tears. By spending a few minutes playing this random kid’s cardboard arcade games, Mullick created a movie which led to a movement which led to a nonprofit called Imagination.org. Their mission is to “find, foster and fund creativity and entrepreneurship in children around the world to raise a new generation of innovators and problem solvers who have the tools they need to build the world they imagine.” I can’t think of a better reason to start a nonprofit. Now Caine is 17-years-old, is a junior board member for Imagination.org and the Two Bit Circus Foundation, and plays an active role in the former’s three main projects: Imagination Chapters, the Global Cardboard Challenge, and the Inventor’s Challenge.

So let’s review: A nine-year-old kid inspires a guy looking for a door handle to make a movie about his cardboard arcade, which then goes viral and becomes national news, leading to donations totaling over a quarter of a million dollars. Next, the guy who makes the kid famous finds global success, starts a website that is dedicated to encouraging creativity in kids around the world, and then creates pop-up learning spaces that foster Creative Play which is a “learning process taps into a child’s natural creative abilities.” On top of that, Two Bit Circus Foundation and Imagination.org, in collaboration with Vans, hosted a Cardboard Challenge in support of Vans Checkerboard Day and the company’s $1 million contribution to creative expression last November. Unbelievable.

These types of connections and chain reactions are undeniable and I’m so glad that I’m part of one with Nidia. If it wasn’t for her, I would know nothing about Caine which would have been a shame because everyone should be aware of this story of creativity, determination, and the power of getting the word out about outstanding people. My significant other and I thrive on innovation and we will strive to make sure Fleet is able to imagine, build, design, or invent anything he wants. I mean seriously, what better things to foster than creativity and entrepreneurship?