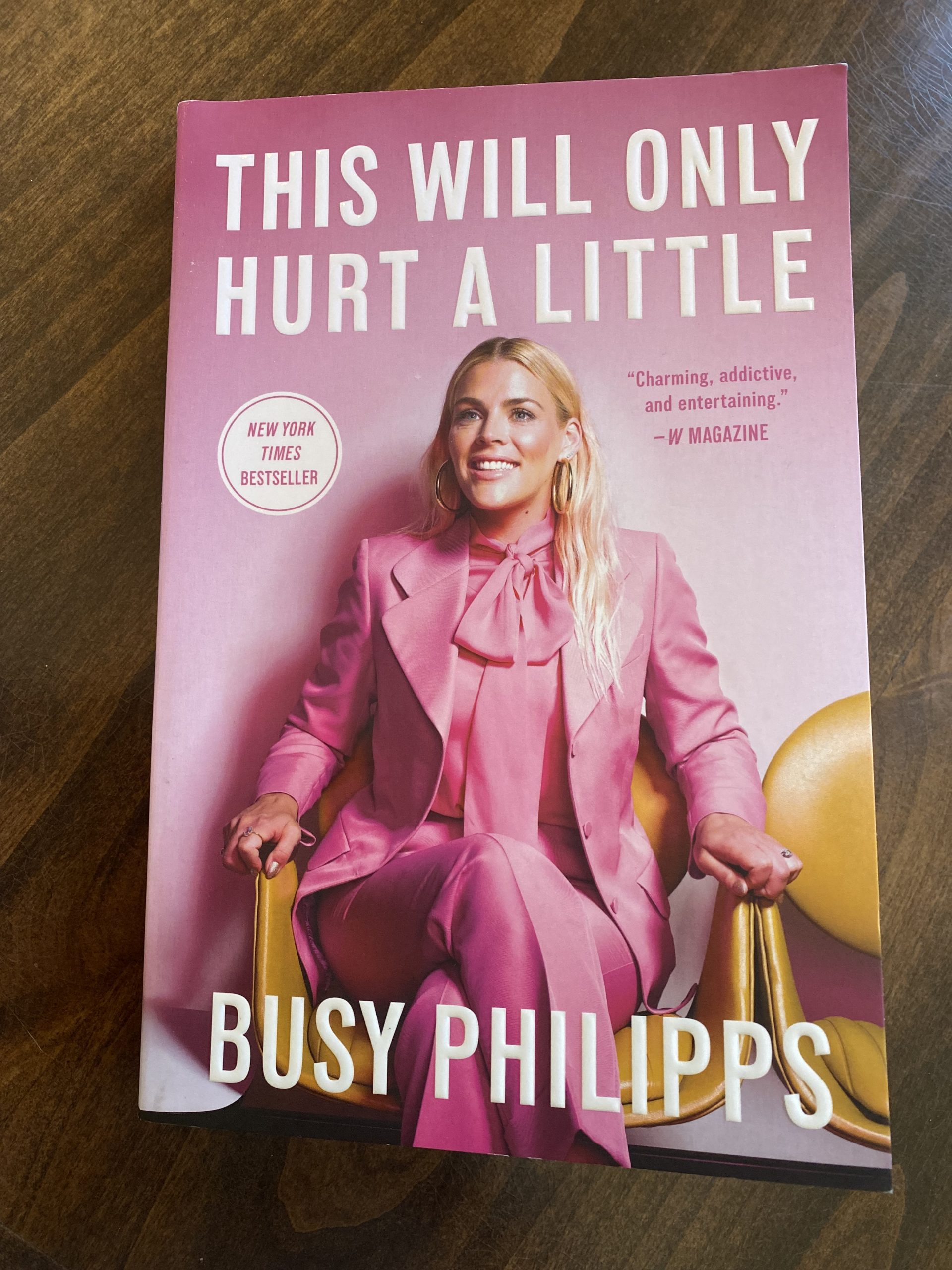 I have to admit that I bought Busy Philipps’ book because I was looking for something light to read. Something that would make me laugh and juxtapose some of the tough content I have to read for work. Also, I had a feeling that This Will Only Hurt A Little would be written in such a way that I could hear the author talking as I read and that’s definitely true.

But to say that I’m a Busy Philipps fan is a bit of a stretch. She was great in Freaks and Geeks, I sort of remember her being on Dawson’s Creek, and she was hilarious in Cougar Town. Her guest appearance on How I Met Your Mother was memorable as well. But she seems to play different versions of the same character in everything – kind of like Sandra Bullock – so I like her, but she’s not the first person I think of when someone asks me to name my favorite actress. That being said, her book is (and I don’t love this phrase but it’s accurate) a page-turner.

In fact, her book is exactly what I thought it would be. Several times throughout the narrative she admits that she is “a lot” – which is exactly right – but she’s also very real and I appreciate that.  One minute she’s intelligently discussing the acting industry: “Sometimes people on TV shows get fooled into thinking that the very thing that made them to begin with is the thing that’s now holding them back.” And the next she is saying things like: “I was trying to convince him it was okay for me to like, give him a hand job or whatever.” Maybe she writes like that to be more relatable. Philipps is four years older than me, so I also appreciate her name-checking Delia’s and 90210, as well as her many music references. In fact, each chapter is named after a song by artists such as Kanye West, Nirvana, Juliana Hatfield, Hole, Stone Temple Pilots, Joan Jett, Tom Petty, etc.

On a more serious note, she provides a ton of detail about her sexual experiences with men (some consensual and some, sadly, nonconsensual), as well as sporadic stories about the “low-grade sexual harassment” she dealt with as a teen. All these stories are horrible, and she is brave for talking about what happened, but as a reader it’s difficult to reconcile serious topics that are immediately followed with her saying “whatever” and “or something” a lot.

Additionally, there’s a fine line between keeping it real and lazy writing and Philipps walks that line throughout the entire book. Speaking of which, she repeatedly uses “weird” to describe everyone and everything – to the point where if a Busy Philipps drinking game existed, and the rule was that someone had to drink every time they read the word “weird,” they would pass out. On one page she uses the word four times. She also addresses the reader like we are buddies: “I know, I know. You hate it. I get it.” or “As you can probably imagine.” or “You guessed it.” or even “I know. This is a lot. I’m sorry. But I am. I am a lot.” Philipps also uses caps WAY TOO OFTEN.

As for her family, there are lots of stories about, quotes from, and conversations with her mom, which makes sense because the book is dedicated to her. While Philipps’ mother is clearly the backbone of the narrative, her dad is barely mentioned and she kind of throws her sister under the bus. Conversely, she’s kinder when talking about the family she’s created with her husband Marc and two daughters but is very candid when describing her and Marc’s relationship after they had their first kid. I could definitely relate to a lot of what she said.

Another running theme throughout her book – besides many situations beginning and ending with her crying – is that there’s a fine line between honesty and scores to settle. And she has a lot of scores to settle – especially the Blades of Glory debacle, her antagonistic relationship with James Franco, people on the set of Dawson’s Creek who were only interested in Katie Holmes, and several male counterparts who treated her badly. She calls them all out. Every single one of them.

I wonder if I’d be friends with Philipps or if she would be “too much” for me. One minute she’s talking about how she’s always felt left out, judged, and undervalued and the next she’s describing herself as the best in the business. She’s human and I acknowledge the struggle it takes to exist sometimes, but she is definitely a series of contradictions. At least she knows it. Philipps is also tough as nails. She’s been through more than her fair share of humiliation and has been given a hard time for not being a size two in land of size zeroes. It’s gross and I hate that people have consistently made her feel that way.

It’s also interesting that the book starts and ends with Instagram. I follow her on Instagram but didn’t realize she has such a powerful presence. In fact, Marisa Meltzer of The New Yorker wrote an article in 2017 about Philipps that says: “Every social-media platform has an early adopter who defines its potential. For Instagram Stories, the actor Busy Philipps fills that role.” Who knew?

Here is what else I learned: