Although I neither surf nor skateboard (the closest I get to either is snowboarding), both sports have become part of my lexicon as a result of my boyfriend’s longtime interest and the culture in which I live. When the ski lifts are closed, people all over Eagle County flock to the local skate parks to hone their skills, get ready for snowboard season, or to get some exercise. When skateboarders aren’t at skate parks, they also use their “toys” to get from point A to B.

Over the years I’ve heard lots of talk about how long it took for snowboarding to officially become an Olympic sport (it finally happened in 1998) and how skateboarding and surfing probably would never earn the recognition. Well, those days are over. As of yesterday (August 3, 2016), both sports were added to the 2020 Summer Games in Tokyo as well as karate, sports climbing, and baseball/softball. This decision means the addition of 18 events and 474 athletes. 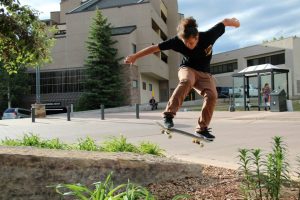 According to CNN.com, “both the International Olympic Committee (IOC) and the Tokyo Organizing Committee placed an emphasis on getting a younger generation of athletes excited about the Games.” While baseball and softball have been included in the Olympics before, the other sports have not which is interesting since the decision to include all five was unanimous.

While I’ve written newspaper and magazine articles about skateboarding, watched friends participate and compete in contests, and have seen countless episodes of skateboarding clips, movies, and shows like “King of the Road” on the Viceland channel, I don’t skateboard. But I do find it fascinating – especially the award-winning 2001 documentary Dogtown and Z-Boys that explores the rise of skateboarding in the 1970s by focusing on pioneers Stacy Peralta, Jay Adams, and Tony Alva. And you know where all those guys got their start? Surfing.

I’ve also watched The Bones Brigade Video Show, a 1984 skateboarding video produced by Peralta and Craig Stecyk (who took photos of the Z-Boys in the 1970s), that featured members of the Bones Brigade skateboarding team. Those members included, but were not limited to, Steve Caballero (who Thrasher Magazine named “Skater of the Century” in 1999), Rodney Mullen (credited with inventing the flatground ollie, kickflip, heelflip, impossible, and 360-flip), and Tony Hawk (who is considered one of the most successful and influential pioneers of modern vertical skateboarding and is known for completing the first documented 900).

Like snowboarding, skateboarding and surfing are considered “extreme” sports and get a bad reputation based on the type of people who participate because of the clothes they wear, the slang they use, and the length of their hair. If you Google “extreme sports” this is what comes up: Extreme sports (also called action sports and adventurous sports) is a popular term for certain activities perceived as having a high level of inherent danger. These activities often involve speed, height, a high level of physical exertion, and highly specialized gear. Because there are no referees or doctors present, no ball to throw or catch, and no way to predict the conditions, sometimes people forget that these sports are just as competitive and exciting to watch. I’ve been to the X-Games and seen enough Dew Tour footage to know that skateboarding takes skill, concentration, and the willingness to get seriously injured.

All that being said I haven’t always been the biggest advocate of “side stance” sports. I grew up playing volleyball, basketball, and softball which are all team-oriented, ball sports that take place in controlled situations. Being on those teams helped shape the person I am today in terms of my relationships and how I run my business. In fact, I wrote my college entrance essay on how, even at a young age, being a team player taught me to understand when to lead, when to go with the flow, and how to bring groups of people together. I’ll never forget my coaches, my teammates, and the people in athletics I met over the years. Some of them are still my best friends – actually more like sisters and brothers. 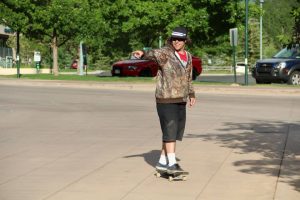 So my point is this: All those “ball sports” I played are similar to skateboarding, surfing, and snowboarding because they bring people together through an athletic endeavor enjoyed by large groups of people all over the world. If anyone has a doubt about the camaraderie and positive culture that is the root of snowboarding they should watch footage of Log Masters or Bull of the Woods. Whether people are participating or spectating, everyone is cheering for everyone to do well. It’s both exciting and uplifting.

Congratulations to both skateboarding and surfing for finally giving those athletes the high recognition they deserve. Try looking past the flat-brimmed hats, t-shirts, skate shoes, and baggy pants. Instead, focus on the fine-tuned athletes who put themselves in front of huge waves and on unforgiving concrete to make themselves better.