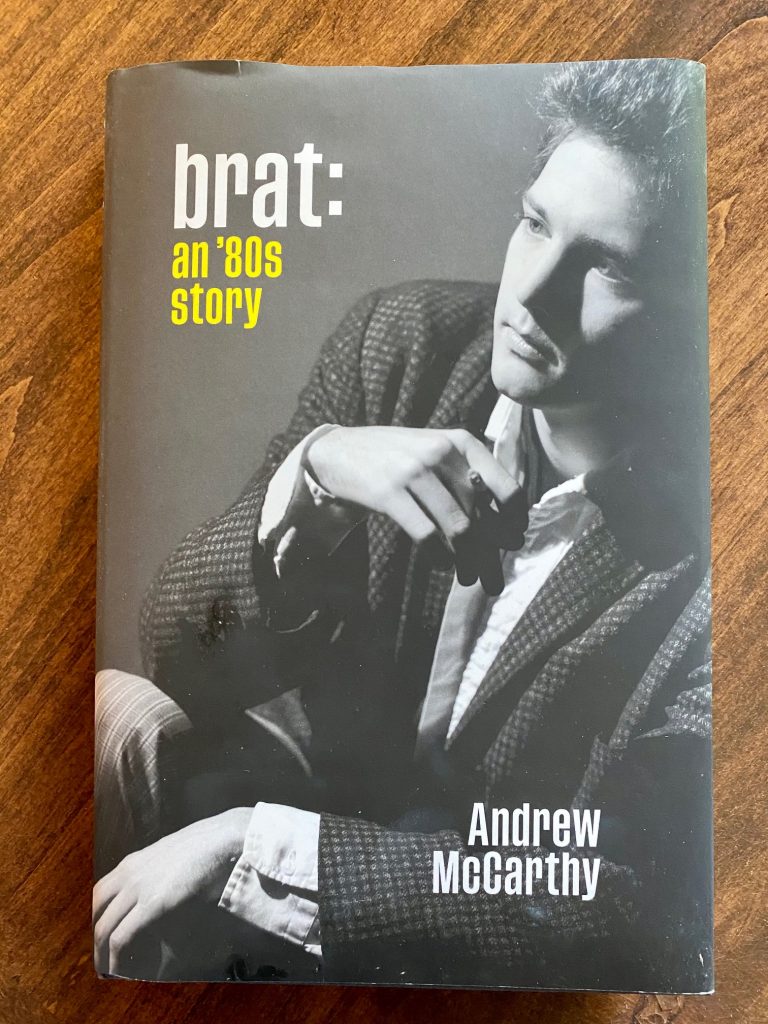 Ten pages. Ten out of 220 pages are spent talking about the Brat Pack. I don’t get it. With a title like Brat: An 80s Story, one would assume that the book would actually talk about the Brat Pack – right? Wrong. Not even one chapter is dedicated to how the now legendary name for a group of actors that comprised the Brat Pack came about.

Although the book is well-written, the false advertising is annoying. I purchased this autobiography because I’ve always been an Andrew McCarthy fan. In addition to enjoying St. Elmo’s Fire, Pretty in Pink, and Weekend at Bernie’s, I also think his later guest starring roles in shows like Royal Pains and Gossip Girl are great. So I wasn’t really looking for a salacious tell-all but I was looking for some kind of analysis and backstory about how one magazine reporter changed the trajectory of pop culture and the professional and personal lives of this group of actors. No such luck.

Instead, I learned a lot about McCarthy’s tortured relationship with his money-hungry father, his sweet rapport with his acting teacher Terry Hayden, and his ugly relationship with alcohol. I guess I should have known disappointment was coming based on the Preface (which he titles “Before It”) where he provides the following disclaimer: “What I claim here is not a definitive truth but my experience of the truth, a truth that has informed and shaped my life over the decades.” Well of course it’s your experience – it’s your book ! In Authentic, Paul Van Doren provides a disclaimer as well but the way he wrote it makes more sense. It is along the lines of: this was a family business, a lot of shit went down, and maybe not everyone remembers the facts the same way but this is what happened. Fair enough.

Similar to Wookie Is Not His Real Name, the first chapter of Brat is short – a glimpse into McCarthy’s future at the Pretty in Pink premiere which he bails on to drink at an empty bar across the street. The next chapter begins at the beginning – with McCarthy’s childhood and family and goes on from there. For someone who is travel writer and director, I’m shocked (and honestly bummed) to report that McCarthy is not much of a storyteller. Instead, the reader gets a lot of self-deprecating commentary and description about him being the smallest in his class that no one really expected much from – except his mother. Then it goes into him living in New York City, where he briefly went to college, and how he spent many lonely nights drinking, smoking weed, and wandering the streets of the city. We learn about his adoration for Al Pacino and Montgomery Clift and how, even when he was still a teenager with barely one acting credit to his name, his father continuously hit him up for money – an occurrence that would constantly repeat until his death because McCarthy didn’t know any better.

Don’t get me wrong – when I was in my 20s I didn’t know a ton about responsibility but I knew more than McCarthy. Some of his descriptions of his thought process (or lack thereof) are unbelievable. While I understand how anxiety tragically played a serious role in many missed opportunities throughout his personal life and career, his ambivalence and naivety to life in general become very redundant and don’t contribute to any type of overarching thesis. What is this book about? How McCarthy was dealt a tough hand but ended up becoming a famous actor by accident?

Although he does provide a few fun Hollywood anecdotes that include Rob Lowe, Elisabeth Shue, Jackie Bisset, Emilio Estevez, Robert Redford, Sammy Davis Jr., Ally Sheedy, Bob Seger, Matt Dillon, Tom Cruise, and Courtney Cox, among many others, there is still not the same knack for storytelling that is present in other autobiographies/memoirs I’ve read. It almost felt like he was annoyed to be writing about his life which is odd for two reasons: 1) McCarthy is a writer! His work has been published in the New York Times, TIME, and National Geographic for crying out loud. 2) I assume nobody forced him to write this book.

Finally, on page 137 of the 220-page book, we get an actual reference to the New York magazine journalist who wrote about and coined the term “Brat Pack” which McCarthy describes as “the phrase that would haunt many of us for years to follow.” And then nothing is said about it again until page 165 when McCarthy talks about the June 1985 cover story that was meant to be a small feature on Estevez but turned into “a stinging indictment of a group of young, successful actors.” But McCarthy never really goes into what specifically was the issue. A group of actors in their 20s were written about because they were all in the same movies and were constantly out drinking? Did that really shock anyone? I guess in 1985 it shocked everyone because McCarthy then says: “The phrase entered the zeitgeist, and the branding instantly burned deeper than anyone could have predicted.”

Over the years I have read articles about how Brat Pack members’ careers suffered because of the negative press about them but McCarthy doesn’t explain anything. Instead, he walks the line between self-deprecation and a snobby but melancholy tone in his writing. In most autobiographies/memoirs I’ve read, which is a lot, I can usually hear the writer talking as I read but McCarthy sounds like a shell of himself which makes him less relatable.

On page 182 and 183 the Brat Pack comes up again but only to explain how many of the actors actively avoided working together as a result of the article. Finally on page 211 we get more of an explanation regarding the Brat Pack: “The open secret, of course, is that the Brat Pack, at least in my experience, never really existed at all – not in a physical sense anyway…Had the Brat Pack existed as a tight-knit community, perhaps we might have found a way to band together and withstand the stinging comments from a disparaging media – maybe even laugh it off. Instead, a cluster of young and scared actors trying to make a name for themselves got some mud slung at them and ran for the hills.” And then the best description: “It would take time for me to not feel that I had been sideswiped by the tag and then shackled to it.” At least that gives some glimmer of analysis regarding what happened. McCarthy also admits that over the years the “disparaging judgement” has grown into nostalgia and that the 80s movies he was in have “placed [him] firmly in the world and among [his] generation in a way that is both singular and communal.” In short, enough time has passed that being part of Hollywood history is “something worth embracing.”

So is the book worth reading? It depends on what the reader is looking for. I thought the bulk of the book would be about the iconic Brat Pack years but I was wrong. When I read Rob Lowe’s Stories I Only Tell My Friends, I was surprised that he spent so much time focusing on The Outsiders but the title doesn’t indicate otherwise so it was fine. In McCarthy’s case, he sets the reader up for – not failure – but maybe confusion is the right word. It’s like picking up a glass thinking there is water inside but instead you taste sprite. It’s fine but just not what you were expecting.

In the Acknowledgements the first two sentences state that the book was almost written 30 years ago and he’s glad it wasn’t. I wonder, with the Brat Pack article being rawer, what the story would have been like instead. At the same time, I understand that writing in hindsight is better (and most likely a less angry and more sober account) all these years later.

“In so many ways I simply ran from my youth. I survived it and wanted to move on.”

“Even rock and roll heaven can grow wearisome.”

“If you are out beyond the safety of the herd, exposed and alone on the leading edge, you are fair game.”

“Instead of allowing success to open up a world of opportunities for me, I began to view it increasingly from the other end of the telescope.”

“We didn’t right our wrongs, nor resolve our past, but simply put its burdens down.”

Apparently, McCarthy didn’t really get along with Molly Ringwald, but he does explicitly state that without her he would have never been cast in Pretty in Pink and his career and life would have been much different.

He describes the St. Elmo’s Fire cast as having a “slight but unmistakable undercurrent of competition.”

Somehow, at 58 years old, he’s only owned one car – a Camaro. Maybe because he’s mostly lived in NYC?

Test audiences convinced the powers that be to change the ending of Pretty in Pink to what we know today.

McCarthy talks positively about his experience making Weekend at Bernie’s but then refers to the second movie as an “ill-advised sequel about which nothing more will be said.” One of few funny lines in the book.