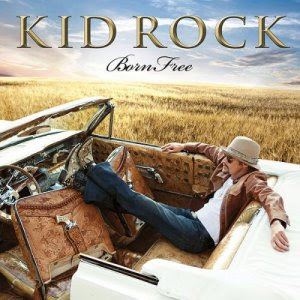 Tuesday, November 16 can’t come soon enough. Why? Because that’s the release date for Kid Rock’s new album Born Free. For all you Kid Rock haters out there listen to his latest single and you’ll change your mind. It’s American rock and roll at its finest and I’m sure the rest of the album will be just as awesome.

With five Grammy Award nominations including Best New Artist and Best Hard Rock Performance under his belt, Kid Rock is a force to be reckoned with. His breakout record was 1998’s Devil Without a Cause which sold 11 million albums behind the hits “Bawitdaba,” “Cowboy” and “Only God Knows Why.” In 2000, he released The History of Rock which was a compilation of remixed and remastered versions of songs from his previous albums as well as the hit single, “American Bad Ass.” In 2001, he released the follow up, Cocky. After a slow start, his country-flavored hit “Picture” with Sheryl Crow resurrected the album and it went gold as a single and pushed the album’s sales to more than five million. It was followed by 2003’s self-titled release, which failed to chart a major hit and in 2006 he released his only live album to date entitled Live Trucker.

Then came the song that seemingly everyone on the planet couldn’t get enough of, “All Summer Long,” which was part of 2007’s Rock N Roll Jesus. The ubiquitous smash hit was a mash up of Lynyrd Skynyrd’s “Sweet Home Alabama” and Warren Zevon’s “Werewolves of London.” Twangy and catchy at the same time, the song was Rock’s first worldwide smash hit, charting number one in eight countries across Europe and Australia. As a result, Rock N Roll Jesus would go on to sell five million albums worldwide including being certified triple platinum in the United States. In total, Kid Rock has sold 22 million albums to date in the U.S.

While some people are turned off by his loud, R-rated songs, his sometimes pimp-like attire and the fact that he married and divorced Pamela Anderson, Kid Rock is a true musician. I saw him live a few years ago and he absolutely blew me away. The guy played like eight instruments and could go back and forth between singing and rapping without missing a beat. Literally. He also is constantly crossing over genres of music. Whether he’s singing rock and roll, rap, metal, country or even a ballad, he will make believers out of his listeners. While “Cowboy” is a fun party song that always gets me going, “Picture” is on the other side of the spectrum as Rock duets/harmonizes with a female singer and plays acoustic guitar. “All Summer Long” was inescapable for probably close to two years and although the tune was partly taken from other songs Rock made it his own. Every time I hear it I think of Bob Seeger singing about Michigan in “Night Moves” which is something I didn’t think I’d ever say when Rock first hit the big time airwaves ten years ago.

Of course the success of Born Free remains to be seen but if his first single is any indication this record may be another multi-million dollar hit. I mean, he did say “I’m going platinum” in “Bawitdaba.” I’d say mission accomplished.