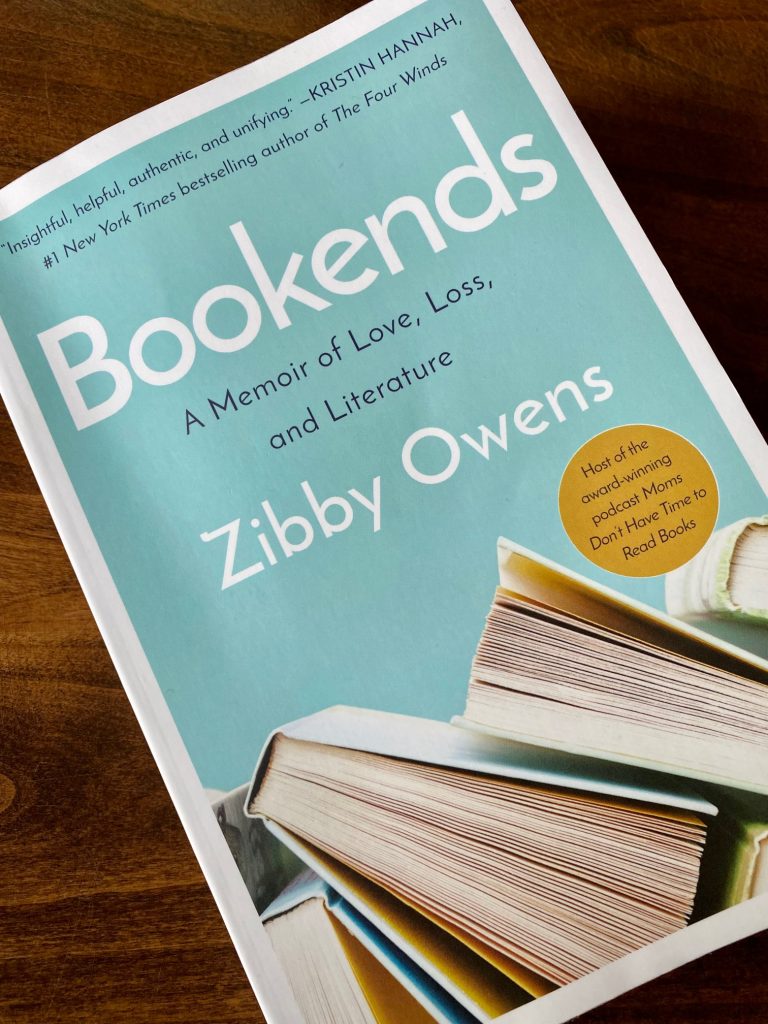 Spoiler alert: As a writer who has written a book, I enjoy reading books about writers who love books! Over the years I have found that many stories (told via book, film, and television), feature a main character who is a writer, an aspiring writer, or someone deeply invested in the book world. That’s true of Emily Henry’s Book Lovers, Cameron Crowe’s Almost Famous, Candace Bushnell’s Sex and the City, and Zibby Owens’ Bookends.

Literally the first sentence of Bookends references a book – Charlotte’s Web – and the emotion it elicits from the writer when she was a child. And that’s just the beginning. Throughout her book, Owens cleverly uses other people’s books to denote milestones in her life, which turns into a list for the reader to reference. She also uses book titles to name her chapters.

Some of the books she references are classics (Little Women and Catcher in the Rye), others are trendy bestsellers (Where the Crawdads Sing and Kite Runner), some are favorites of mine (Malibu Rising and Open: An Autobiography), and many became movies (The Devil Wears Prada and The Notebook). And these are just a few examples – Owens’ book list is 10 pages long, is divided into categories, and includes the authors’ names which I appreciate. I mean who doesn’t love lists? I’m pretty sure Owens does because, as a self-described Type A person, we have a lot in common.

The way Owens talks about books on page five immediately caught my attention because I also feel that books are lifesaving and that “they have allowed me to sort through my own feelings and escape [or understand] someone else’s.” In addition to her writing, Owens is known for her award-winning podcast Moms Don’t Have Time to Read Books which I need to listen to but – ha! – don’t have time for because I’m busy writing and chasing after Fleet. I’ve been asked about whether I would be interested in doing a podcast, but I haven’t done the research. I should. I will.

While Owens is extremely accomplished both personally and professionally, she has experienced insurmountable loss. The deaths she endured continue to take a toll and that’s a lot for one person to carry – especially a mother of four with a business to run. One aspect of her book that was a bit odd was that she briefly mentions her ex-husband in a blink-and-you’ll-miss-it sentence on page 128: “I had met someone and recently gotten married.” While mentioning exes in autobiographies, biographies, or memoirs is definitely not necessary, because he is the father of her kids, I thought there would be a few more sentences about him.

But that’s such a small detail. What’s more important (and prevalent) is Owens’ candidness regarding her family legacy. She talks about how she’s grateful for the “legacy of entrepreneurship and achievement with multiple role models for innovation, hard work, and creation.” Me too. Lucky us. Also, her descriptions of her children and meeting her husband Kyle strike a chord because, in addition to relating to Owens as a person, I relate to her as a writer.

When she tries to sell the book she wrote about the loss she suffered following 9/11, it is repeatedly rejected. But when she writes a book about her life, the manuscript is immediately picked up. I can relate on a much smaller scale. There is a chapter in Wookie Is Not His Real Name called “Girl Walks Into A Bar” that tells the story of how I met my significant other, the ups and downs we have endured, and how everything changed when Fleet was born. My editor talked me into creating the chapter (it was originally just a few paragraphs and part of a different chapter) even though I was initially against it. I didn’t think anyone would care about our story, but I was wrong. To this day, “Girl Walks Into A Bar” is the chapter people mention to me the most.

As a mom (wow it’s still cool and weird and crazy to write that even though Fleet is three years old) I know exactly how Owens feels regarding keeping everyone’s schedules straight. She has FOUR kids and I have ONE and I still feel her struggle. I also appreciate her willingness to keep it real and the way she shows that hard work pays off. My mother always says, “busy people get more things done” and Owens exemplifies that notion. She explains, “The more authors I spoke to on the podcast, the more I realized that being a writer was a trait shared by some of the most amazing people on the planet.” That sentence hit home because it reminded me that my small writing contributions matter. On page 266 she says: “I want to usher new stories into the world from start to finish, both memoirs and novels. Books that tell it like it is.” I think I did that with my book and hopefully writers keep doing the same. Owens definitely did.

“I just knew there were other girls who felt the same way I did, who were stuck inside their souls…I’ve been writing for those girls ever since.”

On 9/11: “The only way I knew how to cope was to write about what had happened.”

“Good enough would have to do. Not everything could be perfect. It was one the most important lessons I learned at business school.”

“I’d always believed in my writing…I understood words. I could hear them as I wrote. I could adjust to make them sound better on the fly.”

“Maybe I could be more laid-back. I mean, I could try.”  I laughed out loud at this because I can relate!

“Ghostwriting was the perfect career solution. It was what I’d been trying to do with my novel anyway: write about ghosts.”

“Everyone has a story. Everyone should be asked how their day was.” No truer words.