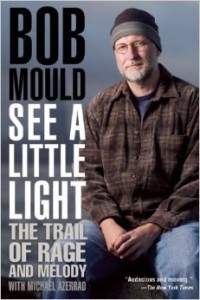 It took 389 pages for Bob Mould, acclaimed lead singer and guitarist of punk band Husker Du and alternative rock band Sugar, to tell his story. And for the most part, it is a captivating tale. If you’re a punk rock fan you’ve listened to Husker Du and if you’re a Foo Fighters fan you should listen to Husker Du because Dave Grohl credits Mould as one of his most significant influences.

But this book isn’t just about the music. Mould starts from the beginning, delving deep into his chaotic childhood, his alcohol abuse and sobriety at early ages, how music got him through the tough times, how he dealt with being a gay man in the rock music scene and where he is today.

Although a few of the chapters provide a little too much information and give too many details, overall the book is fascinating. Mould holds nothing back and paints a very clear picture of exactly what it takes to be a skilled musician, an eloquent songwriter and a successful band leader. He also depicts difficulties that come with working with friends and significant others and, most importantly, finding your place in the world.

A few quotes from the man who created the punk rock soundtrack for three decades:

“Being into a band was like being in a gang.”

“We realized we weren’t alone in the fight to change the direction of modern music.”

“Music had gotten me through my childhood, music was the language I spoke with the other two members of my band – and people were listening to what we had to say.”

“Husker Du was an assault, slamming sonics together to shock people.”

“I had probably been the first of my generation of American underground musicians to step away from a well-known band to begin a solo career.”

“What I learned: if the song is good, it will resonate, no matter what the orchestration.”

“The only thing a songwriter has, in the end, is he publishing.”

In reference to a SPIN magazine article: “I could try to steer the story the way I wanted it to read, but ultimately, editorial always wins out. It’s the business.”

“To this day I’ve found no good way to end a band.”

“It was inspiring to write about the people I was interested in from a more optimistic emotional view and boiling those feelings down into songs.”

“Beyond my personal reasons for not looking back, a Husker Du reunion would surely tarnish the history of the band.”

“So we listen, we become fans, we become inspired, we create and somehow the work we create eventually finds its way back to the ones who inspired us.”

“I stayed curious and active – something a lot of people don’t do later in life.”

“As life goes on, I’m much more aware of how all my experiences have contributed to who I am and what I do, and how those connections lead me from one place to the next.”

Things I learned about Bob Mould and his bands:

-Husker Du was the name of a board game (“in which the child can outwit the adult”) that was advertised on TV. For the band, “the name Husker Du was an identifier, not a description.”

-He was a card-carrying member of the Kiss Army.

-The Ramones was a gang he wanted to join.

-When Husker Du played an Indian reservation in Reno the flyer listed the band as “Who Screwed You.”

-He describes himself as an American outsider/storyteller.

-Husker Du had a huge influence on the Pixies – there was an ad placed in 1986 in a newspaper that said: “Bassist wanted for rock band. Influences: Husker Du and Peter, Paul and Mary.”

-Mould ran his own business affairs for 11 years and learned so much about the music industry during that time that fellow musicians often called him about the business side of things.

-People who were influenced by Mould’s work and who influence his work: Kevin Shields from My Bloody Valentine, Frank Black of the Pixies and Dave Grohl of the Foo Fighters.