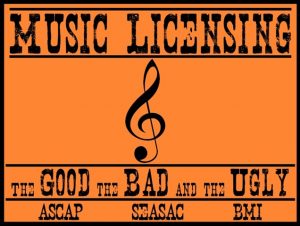 You can play or host live music in your bar or restaurant, but it’ll cost you.

Of course I’ve always known that live musicians get paid to play, but what I didn’t know until yesterday was that bars and restaurants are required to pay music licensing fees for the right to play music in their establishments. That mean your local watering hole is paying a yearly fee for live music, DJs, jukeboxes, and even ambient music.

After hearing this information, I immediately contacted a lawyer friend of mine to ask if what I learned was legit and he assured me that it was. He also sent me an article exemplifying what happens to these establishments if they don’t pay. But we’ll get to that in a second. Other questions that immediately came to mind were: How much does playing music cost per year? Who regulates it? What is the yearly fee based on? Does it depend on how often the establishment hosts live music or does it have to do with the bar or restaurant’s capacity?

Although there are three main music licensing companies, Broadcast Music Inc. (BMI) is the largest music rights organization in the United States and they are cracking down. They’ve been calling one of my clients several times a week for the past few weeks because she hosted three live music events this summer. The question is how did they know about the live music? Did a company with offices in Nashville, New York, Los Angeles, Miami, London, Atlanta, and Puerto Rico seriously read the Vail Daily or send a spy to a locally-owned business in the mountains where local musicians were performing? I assume they have an internet-based program that does the searching for them but either way – it’s extremely lame.

According to BMI’s website, the company functions as “the bridge between songwriters and the businesses and organizations that want to play their music publicly.” They describe themselves as “a global leader in music rights management” that “serves as an advocate for the value of music.” Also, and I’m not sure how, BMI apparently represents close to 12 million musical works created and owned by more than 750,000 songwriters, composers, and music publishers. Those numbers are huge! Does that mean that BMI is like a conglomerate record label?

Founded in 1939 in an effort to “represent songwriters in emerging genres…and protect the public performances of their music,” BMI has clearly been around for awhile. Additionally, and I don’t quite understand how, the company operates “on a non-profit-making basis.” But don’t let that fool you. As my good friend and longtime bar owner Dave Peterson points out, “non-profit-making” doesn’t mean “non-money-making.” Obviously BMI is making money because, as my lawyer buddy explained, the company’s process is in fact legit and they will come after you if you don’t comply. He also said that BMI (and other music licensing companies) make deals with artists to manage and license their music and collect royalties which, once again, sounds like something a record label is supposed to be doing.

Another issue is the fact that BMI doesn’t take original music into consideration. How can they account for local artists playing their own tunes who have nothing to do with BMI? Most of the articles I’ve read about BMI’s music licensing practices have demonstrated small business owners’ frustration regarding the overall licensing process. When mom-and-pop establishments don’t have the cash to fight the Man and end up paying the fees or doing away with live music, no one is happy. Additionally, it seems that BMI’s catalog is so massive that it would be virtually impossible to play music that didn’t include their songs. That being said, there are some places that just pay the annual fees and move on because, as Peterson says, “It’s not worth fighting it because you will lose.”

While Peterson is fine with paying the fees, his main question is a good one: “What percentage of the money does the artist actually see?” If you can find it on BMI’s website let me know – I’ve scoured it and can’t seem to locate any specific language regarding how many dollars artists collect. The website provides lots of details regarding royalty payment dates and information about how BMI calculates royalty payments depending on the tour or event, but there are no hard numbers. Here’s why: “Since the number of BMI-licensed works changes from one quarter to the next, as do the license fees collected by BMI from concert promoters and venues, the royalty rate for your works performed in live pop concerts will also change each quarter.” So still no clear answer.

Although some of BMI’s business practices are positive – i.e. ensuring that artists who have songs featured in television or movies get paid – others, such as sending spies into small establishments to slap them with heavy fines, are absurd. What does BMI hope to accomplish by taking down local joint after local joint across America? Can there be some kind of legislation that allows bands to perform songs live but then requires payment for ambient music or jukebox play? If a live artist or band plays a song, is it possible to argue that it’s technically not the original artist’s voice and should therefore be considered “their take” on the song? According to Google, a cover song is defined as “a new performance or recording of a previously recorded, commercially released song by someone other than the original artist or composer.” The key word there is “new” – especially if the cover artist or band rearranges the song to better fit their voice or the band’s sound.

I’m all for paying for music – just ask iTunes and my local record shop. But I hate the idea of neighborhood establishments choosing not to host live music because they don’t want to deal with the BMI hassle. Unfortunately, music licensing issues aren’t going anywhere so to those who own local bars and restaurants: Be careful. The Man will find you and the Man is BMI.