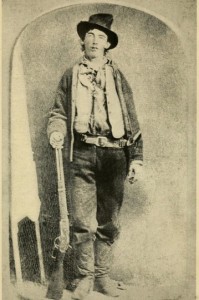 The last remaining original portrait of one of the Wild West’s most notorious outlaws sold at a Denver auction on Saturday, June 25 for $2.3 million.  Yep, you read that right.

It was the only known tintype photograph of Billy the Kid and it sold at Brian Lebel’s 22nd Annual Old West Show & Auction to 71-year-old Florida businessman William Koch.

Tintypes were an early form of photography that used metal plates.  They are reverse images which has led many to mistakenly believe that Billy the Kid was a lefty.  In the photograph, Billy the Kid is shown with his 1873 Winchester carbine in one hand and a Colt revolver at his hip.

Thought to have been taken outside a saloon at Fort Sumner, New Mexico in either 1879 or 1880, the photograph was expected to sell for about $400,000 but clearly it was worth more than anticipated.

According to legend, Billy the Kid gave the image to his friend Dan Dedrick and the tintype has been owned by his descendants, the Upham family, ever since.  It has only been publicly displayed during the 1980s at a museum in Lincoln County, New Mexico.

Koch, an international businessman, also owns other rare artifacts from the Old West including a rifle once owned by General Custer, as well as guns that belonged to infamous outlaws Jesse and Frank James.

The astonishingly high number of this sale shows how people are still fascinated by the Old West – a time that was romanticized for its gun fighting, whiskey drinking, card playing and brothel loving ways.  People come from far and wide to America’s West to see the places that were once inhabited by notorious gun-slinging outlaws like Jesse James, Wyatt Earp,  Butch Cassidy, the Sundance Kid, Thomas Coleman Younger and of course, Billy the Kid.

Over the years, Hollywood has made some of my favorite westerns – Tombstone, Butch Cassidy and the Sundance Kid and Young Guns – about these notorious people.   If you haven’t seen these movies and you love the West watch them – it will remind you why history remembers the names of the outlaws and not the sheriffs.