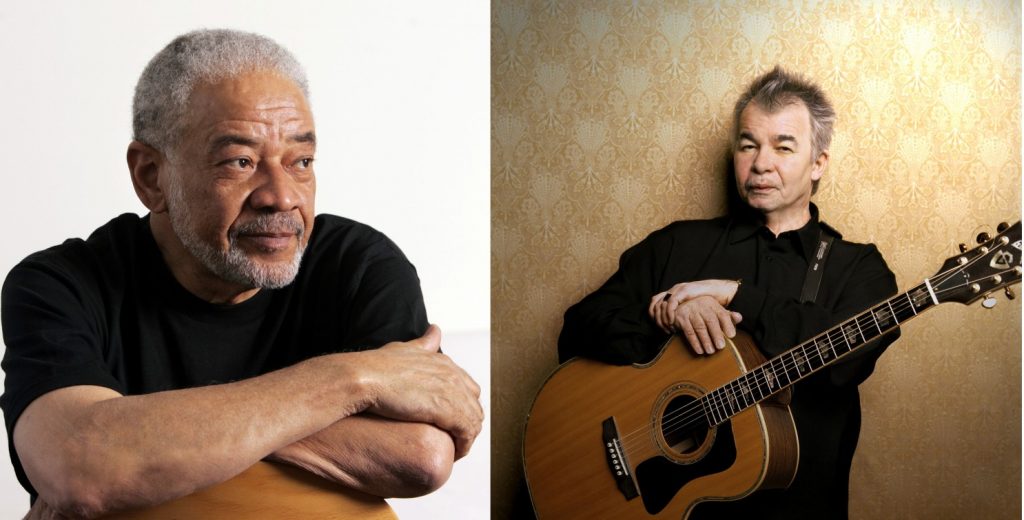 In January 2016, Glen Frey and David Bowie both passed away within the same week and the music world mourned. Fast forward to April 2020 and it’s happened again – Bill Withers passed away on March 30 and John Prine died yesterday. While Withers and Prine didn’t necessarily have the rock star status of Frey and Bowie, they were incredible songwriters who made an undeniable impression on a variety of genres.

Best known for “Ain’t No Sunshine,” “Use Me,” and “Lean on Me,” Withers is a three-time Grammy winner who was also nominated for six more. Even though he was a professional musician for only fifteen years, in 2015, he was inducted in the Rock and Roll Hall of Fame. His songs are important because they evoke the kind of emotion that is beyond believable. Released in September 1972, “Use Me” is my favorite because it tells a story through the creative use of bass and percussion along with Withers’ unmistakable easy-going voice. Because this song is equally powerful and relatable, it has been covered by artists and bands from all over the music map including Fiona Apple, Mick Jagger, Gwar, Ben Harper, Hootie & the Blowfish, and Better Than Ezra, among many others.

Most people know John Prine for his song “Angel From Montgomery,” and they should. It is beautiful and seamlessly crosses country, Americana, folk, and rock genres. The song has also been frequently covered by a wide array of artists, especially by Bonnie Raitt, along with Carly Simon, Ben Harper, Old Crow Medicine Show, and John Denver, among others. Like Withers, Prine is a three-time Grammy winner but earned twelve nominations. A fun fact I learned today is that he was discovered by outlaw country music legend Kris Kristofferson.

Both artists got their starts in the early 1970s and left their mark on the music industry. In a time that is characterized by sadness and uncertainty, it’s even harder to process these deaths. Although I can’t remember the first time I heard “Use Me,” I do remember the first time I heard “Angel From Montgomery.” Almost twenty years ago I was in Montana and a musician friend pulled out his guitar and started singing the song. It blew me away because even at the first listen I could feel the pain coming from the chorus:

“Make me an angel that flies from Montgomery

Make me a poster of an old rodeo

Just give me one thing that I can hold on to

As soon as I got back to Miami, I bought Prine’s self-titled album and listened to it over and over again. He was a true storyteller.

If Dan the Wrench and I could do our Bite the Bullet radio show this Friday, it would be a tribute to Bill Withers and John Prine. Even if their songs are not your favorite, the quality of their writing is undeniable – it’s raw, real, and gets under your skin and stays there:

“If dreams were lightning, thunder were desire

This old house would have burnt down a long time ago”

Rest in peace Mr. Withers and Mr. Prine. When our lockdown comes to an end, I owe you both a radio show.