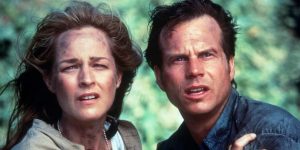 When actors and actresses pass away, it’s interesting to see what they are most remembered for – their work or something crazy they did during their career. Although his name has spent time in the tabloids (scientology, two divorces, gay rumors, etc.), a movie star like Tom Cruise will always be remembered for his hits including Top Gun, Jerry Maguire, Risky Business, and Mission Impossible, among many other blockbusters he starred in throughout the years. On the other hand, someone like Lindsey Lohan will most likely be remembered more for shoplifting scandals and other legal troubles than the movies she made.

And then there are actors like Bill Paxton, who mostly stayed away from scandal and have been in a long list of films people continue to enjoy. He will be remembered for his repertoire of movies that span a variety of genres, as well as his starring role on the HBO show Big Love. I first met him in 1993’s Tombstone where he played Wyatt Earp’s (Kurt Russell) brother Morgan. His part was small, but the trio that was Russell, Paxton, and Sam Elliott, along with Val Kilmer’s unforgettable performance as Doc Holiday, was very entertaining. Then in 1995, Paxton played one of the leading men in Apollo 13 – Lunar Module Pilot Fred Haise. Again, he worked among other great actors including Tom Hanks, Ed Harris, Gary Sinise, and Kevin Bacon.

But the film that really made me a fan of Paxton was Twister. Call me crazy, but I loved that movie in 1996 and I still love it. Paxton and Helen Hunt were a captivating pair and the action never stopped. Having Philip Seymour Hoffman as part of the cast definitely helped too. Paxton’s small but pivotal role in 1997’s Titanic was next, as he played treasure hunter Brock Lovett who was looking for a rare diamond called the “Heart of the Ocean” in the present day wreck of the Titanic. Although his screen time was minimal, his character’s shift from focusing on greed to historical significance was most definitely memorable.

Side notes: Apparently, all the movies I saw Paxton in start with the letter “T.” Also, people sometimes confuse Paxton with Bill Pullman – in fact yesterday a coworker of mine referred to Paxton as “the best fictional president.” The character he was referring to was actually Pullman’s character in Independence Day.

Anyway, Paxton’s death is definitely a loss for the acting community, especially since he was only 61 years old. A few of my favorite quotes delivered by the late great Bill Paxton:

Morgan Earp (Tombstone): [after striking Cowboy #2 over head with his pistol] “He’s the asshole who enforces the law!”

Bill Harding (Twister): [to Helen Hunt after seeing cows fly through the air] “Why can’t we spend a normal day together?”

Brock Lovett (Titanic): “Seeing her coming out of the darkness like a ghost ship, it still gets me every time.”

Rest in peace Mr. Paxton – you will be missed.