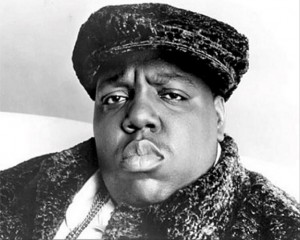 Although I’m not exactly a Beatles fan, I do understand the significance of John Lennon’s death and know the date: December 8, 1980.  If you’re my age you weren’t alive when this happened but you have heard your parents tell their stories of where they were when Lennon was shot.

As a Miami native and someone whose family was in the record business, I was exposed to hip- hop at a relatively early age.  As a result, I remember where I was when Christopher Wallace aka The Notorious B.I.G. aka Biggie aka Biggie Smalls was killed on March 9, 1997 in a drive-by shooting in Los Angeles. I was on the way to school sitting in the backseat of my annoying classmate’s father’s car – ugh I hated carpool – and because this man would listen to nothing but NPR, I usually would bring my Walkman (yep, that’s how long ago this happened) to listen to music. But on the one day I left my Walkman at home someone on NPR announced the death of one of hip-hop’s biggest rising stars.

Why was his death such a big deal? When he released his debut album, 1994’s eerily titled Ready to Die, he became a central figure in the East Coast hip-hop scene partly thanks to his partner in crime (literally and figuratively) Puff Daddy. Two huge hits, “Juicy” and “Big Poppa,” helped the record achieve gold certification only two months after its release. In 1995, only one year after the album’s release, Ready to Die went double platinum, eventually achieving quadruple platinum sales. Culturally, this record increased New York’s visibility in the rap scene at a time when West Coast hip-hop (Snoop Dogg, Dr. Dre, etc.) was dominant in the mainstream. Unfortunately, while recording his second album, Wallace became heavily involved in the growing East Coast/West Coast feud which ultimately led to his demise.

Following the tragedy, his equally eerily titled double-disc set Life After Death, released 16 days later, reached number one on the U.S. album charts and was certified Diamond in 2000. Life After Death is one of the few hip-hop albums in the history of music to receive this certification. It was also nominated for three Grammy Awards in 1998, including Best Rap Album, Best Rap Solo Performance for “Hypnotize” and Best Rap Performance by a Duo or Group for “Mo Money Mo Problems.”

While I’m clearly a big rock and roll fan, hip-hop will always be part of my history and have a place in my music-loving heart. I’m from Miami – a place that brought so many of the genre’s greats to the forefront and launched so many of their careers. After spending all those days and nights working in a record store and watching so many people buy Biggie records (including the incomparable Alonzo Mourning) I can’t deny the power and importance of hip-hop. Rest in peace Biggie – I’ll be playing four of your tracks on Bite the Bullet on Wednesday.