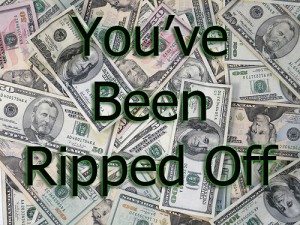 I consider myself a pretty reasonable person when it comes to spending money. I try not to spend money I don’t have and I try to be careful with what I do spend – basically I want to make sure it’s worth it. So, when things I want to do or stuff I want to buy is a complete rip-off and there is no way around it I get annoyed. Am I alone? I doubt it.

Here is a list of the Top Four Biggest Rip Offs I Can’t Find A Way To Avoid:

Concert tickets – Don’t even get me started on how much money I’ve spent on summer concert tickets. I’ve written about how Ticketmaster is ruining lives (see posts on April 11, July 8 and December 4, 2011) and how the whole system sucks but it seems to be getting worse. Record stores are already almost extinct – you’re more likely to see a snow leopard walking around downtown Denver than an independent record store – so why are Ticketmaster and AEG Live trying to make it impossible to see live music?

Ink Cartridges – One ink cartridge in my office costs close to $125 per color which seems crazy to me since you could arguably purchase a new printer for the same price or less than it would cost to refill the cartridge. But what’s the alternative? Documents, photos, etc. need to be printed and the only way for that to happen is to either spend money at Kinko’s or spend money on more ink.

Lift tickets – It’s the end of the season and the snow sucks but Beaver Creek has the balls to charge $105 for a lift ticket. Are you kidding me? In 2010 a lift ticket was $97 and the snow was better that year. What the hell is going on? Buying a snowboard and gear is expensive enough – please don’t make the sport more inaccessible than it already is. Also, what is the justification for the price hike? Are these mountains offering something new? Do the lifts now come equipped with cup holders and hand warmers? Give me a break!

Razor Blades – Why are they so expensive? They last for a few days and then you have to toss them. So why is a pack of right razors $22? I don’t get it but again, what’s the alternative? Shaving with a sword?

If anyone has any ideas on how to avoid these ridiculous costs please let me know. This concludes today’s rant. Thank you!