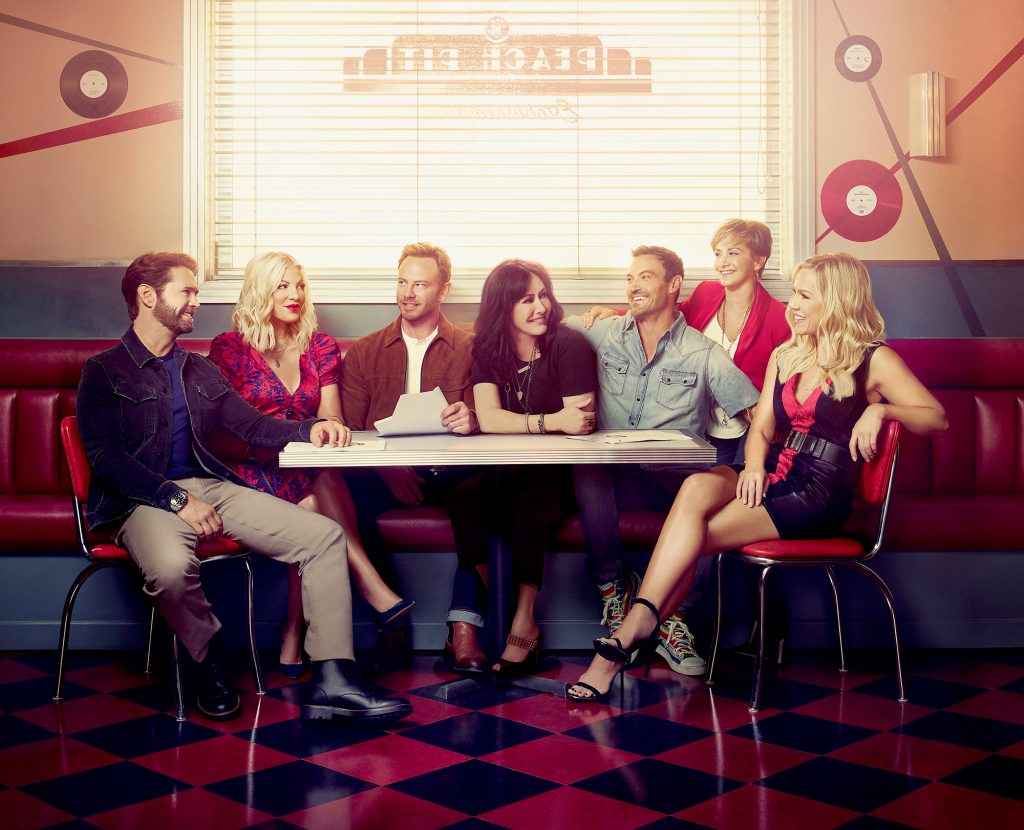 In a time when it feels like everything is being rebooted, redone, revived, and revamped, it’s hard to differentiate between what’s worth watching and what isn’t. That being said, if you were a Beverly Hills 90210 fan, or if you’re still a fan who watches the reruns on the Pop channel, you’ll want to tune in to BH 90210. Even if the only reason is to watch arguably one of the most iconic casts in television history share a screen for the first time in 19 years. Yes, I know the casts of Cheers, Seinfeld, and MASH are probably more iconic, but still. Unless you have been living under a rock since 1990, you know who these people are because Jason Priestley, Shannen Doherty, Jennie Garth, Ian Ziering, Gabrielle Carteris, Brian Austin Green, and Tori Spelling continue to be household names.

So let’s get into the show. BH 90210 in 2019 looks like this: Old friends together again but more aware of who they are and where they came from. The beginning credits brought me right back to the 90s – except now they are all in their 40s and 50s, have had their share of plastic surgery, and have been off the air for 19 years. Yes, 90210 ran from 1990 to 2000 which is quite a feat for a show that was almost cancelled after its first season due to poor ratings.

While there is no question that 90210 made its mark on pop culture, it’s hard to know if a revival will work in any capacity. For example, after six seasons of successful television, the Sex and the City cast enjoyed high praise for the first movie but the second was a disaster. That being said, BH 90210 is a little different because it is both a continuation and a reiteration of what fans tuned into each week for a decade. In short, it’s a show within a show. The brainchild of Garth and Spelling, who have created a parallel universe that resides somewhere between meta, comedic, and reality television, the show depicts the aforementioned actors as heightened versions of themselves headed to a 30thanniversary reunion event after which they decide that they should create a show that reboots the original 90210. It’s a lot to comprehend so here are a few notes from episode one:

With all the remakes out there, the question is whether or not BH 90210 is worth watching. The answer is yes. I tuned in every Wednesday night when I was in middle and high school it’s fun to be doing it again in my 30s. What’s nice about this show is that it’s more than a trip down nostalgia lane – there is new material here that offers a look behind what was really going on with these people and how the show and their characters shaped their real lives.

In one scene, Garth and Priestley discuss what their lives would have been like if they hadn’t been on the show. Like hit songs created by pop groups, the show is the reason they are famous and also their downfall because it will forever represent what they are known for no matter what else they have done professionally. That’s how iconic this show was, is, and continues to be. Soapy or not, it broke television barriers and set trends in a lot of ways in terms of tough topics, language, storylines, and fashion.

If you’re looking for a new twist on an old concept, set your DVRs (or VHS players if you really want to roll back to the 90s) for BH 90210 and enjoy the comedic nostalgia that breaks new ground with old friends.