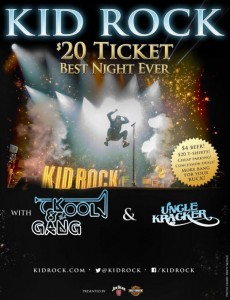 As ticket prices have increased over the years the question of how much to spend on live music has often been the center of debate. While some fans want to see talented new artists like Adele, Mumford & Sons, Black Keys and Lady Gaga, others are excited to see old school artists they missed during “their generation” such as Bob Seeger, Fleetwood Mac and Bon Jovi. Either way, as a result of the consistently declining business that used to be called the record industry, tickets promise a good time at a big price.

For example: Even though I saw Prince at a large venue almost 10 years ago, the second I heard he was playing at a tiny venue on the most notorious street in Denver I had to buy tickets. Yes the price for general admission was absurd but I couldn’t possibly miss out. It’s Prince for crying out loud! In a venue that houses just over 2,000 people! At 11:30 at night! Who does that? I had to see it.

Another example is the highly-anticipated Rolling Stones tour – “50 and Counting” – which will kickoff at the Los Angeles Staples Center. Next they’ll hit Oakland’s Oracle Arena on May 5, tour through the month and wrap up on June 18 at Philadelphia’s Wells Fargo Center. Want to know how much tickets will set you back? Over $300 for nosebleed and over $800 for first level. Yeah.

While I understand that the music business is in a very different place in 2013 than it was in 1997, I was lucky enough to see the Stones in 1997 at Miami’s Orange Bowl and my ticket was just over $76 and my seats were good. To say that’s quite a jump is an understatement.

But you know what’s not? Kid Rock tickets. I saw him in 2006 and my ticket, with convenience charges of course, was about $50. You know what tickets to his show are running this summer? $20 – no matter where you are sitting. Because in an effort to damn the man Kid Rock’s “$20 Best Night Ever” tour will stop at 29 U.S. locations and will feature his Twisted Brown Trucker Band, along with Kool & The Gang, ZZ Top and Uncle Kracker.

Offering more than just discounted reserved seating and lawn ticket prices, Kid Rock has also announced that draft beer will be $4, the coffee will be free and discounted merchandise and food will also be available. Unidentified special Walmart locations are also expected to be offering a $20 ticket package for fans that includes no additional fees or parking charges.

Kid Rock said it was his decision to take a pay cut and that he made the tickets more affordable to benefit those struggling during the tough economic period. He also made it clear that although the ticket prices are low the shows still promise premium entertainment and said that they are not sparing any expense on the tour.

For those who write Kid Rock off as a random Detroit artist who started off in the rock/hip hop genre and fell into country think again. He can play over 10 instruments, puts on a great show and has traded verses with some of the best in the business including Aerosmith, Bob Seeger and Sheryl Crow. But that’s not even the point. The point is asking yourself: What’s a show worth to you? Would you rather spend a large sum of much money on awesome seats or save money and see your favorite artist/band from the back of the venue? Personally if I’m going to see live music I want to have good seats – otherwise I’d watch it at home on DVD or on a HBO special. If I’m going to a venue, regardless of the size, I’m paying for good seats.

So is Kid Rock’s tour a gimmick or something that artists should seriously consider? How can he afford to take such a big financial hit on such a large tour? Is he pulling a Radio Head circa 2007 when the band released In Rainbows online and invited fans to pay whatever they thought the album was worth?

While I wish that tickets were cheaper, that “convenience” fees didn’t exist and bands didn’t have to rely on gimmicks to fill seats, this is not 1995 and people are not lining up outside of local records to buy tickets. The question is will artists follow in Prince’s footsteps and justify the cost by playing in a small venue or take Kid Rock’s route by playing the same venues with lower prices? And the bigger question is how will fans respond.