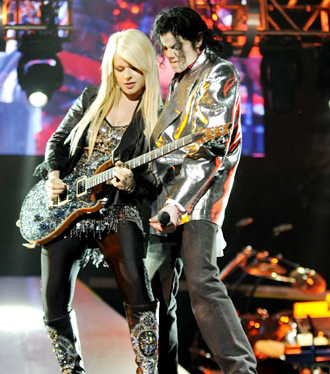 I’ve been meaning to write this blog post since I saw the rehearsal footage in Michael Jackson’s This Is It movie. The blonde, badass guitarist he hired blew me away so I did some research. Turns out her name is Orianthi; a 24-year-old from Australia who picked up the electric guitar at age 11. Her influences are guitar greats like Jimi Hendrix, Eric Clapton, Cream and Santana, along with some of my favorite 80s metal bands including Whitesnake, Van Halen and Def Leppard. I knew I liked this girl!

In the last few years Orianthi has performed onstage with Carrie Underwood at the 2009 Grammy Awards, opened for Steve Vai, and traded solos with Carlos Santana. After seeing her perform with Underwood, MJ called Orianthi with an offer for her to be his guitarist for his dates at the O2 Arena in London.

Although the tour never happened, This Is It is worth watching just to see this girl shred her guitar. When she played Eddie Van Halen’s solo for “Beat It” my jaw hit the ground. I knew we hadn’t seen the last of her.

At the end of 2009, Orianthi released her debut album called Believe on which she writes, sings and leads her band all by herself. If you happen to catch her video you might mistake her for Avril Lavigne when she sings but then all of the sudden you hear her play guitar and you would swear it was Slash. Seriously. And I don’t make Slash comparisons lightly. So don’t adjust your televisions or radios; Avril Lavigne did not learn how to play guitar that well and no, Slash isn’t guest guitaring on a new pop single. It’s just that we’re seeing the best new female guitarist of our generation.