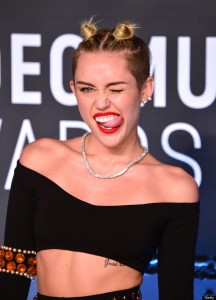 Although I enjoy social media and it’s clearly not going anywhere, I’m always baffled when people use it as a platform to blurt out their angry rants. If you’re going to talk about something you don’t like at least make it well-written, clever or funny. Between the Miley Cyrus VMA posts and the Ben Affleck Batman posts, it’s like everyone is enraged and taking it out on Hollywood.

In Cyrus’s case, there is reason for the outrage. Her weird, bear-themed, so bad it would make a stripper blush, can’t keep her tongue in her mouth, slut-a-thon performance deserved every piece of negative press it received. But aren’t weird performances the cornerstone of the VMAs? What did you expect from Miley? She’s a 20 year-old nutjob who seems to be on the way to Lindsay Lohan-ville and it’s not good. Meanwhile, Robin Thicke – whose lyrics are just as inappropriate as Miley’s dance moves – seemed to just be along for the ride. But honestly what was he going to do on a live awards show? He had to play along.

What’s interesting is that this isn’t the first time we’ve seen a young girl make a very public turn into stripperville on live television. Remember when Britney Spears danced with the enormous snake to “I’m a Slave 4 U” in 2001? Guess how old she was? 20 years old – just like Cyrus. Both of them were 20 years old, both pretty much did a strip tease on live TV and, although Facebook and Twitter didn’t exist in 2001, their performances were the most talked about of the night. The differences, in my opinion, are that a) Spears is a better dancer and entertainer. b) Although Spears’s MTV moment was clearly a provocative performance it wasn’t offensive i.e. there were no inappropriate foam finger gestures and she kept her tongue in her mouth. c) The costumes and stage set were actually somewhat artistic rather than people with large bear bobbing their heads everywhere.

On to Ben Affleck. The social media sites went insane when the official announcement came that he would play the next Batman. Why are people so angry about this? Haven’t we forgiven him for Jersey Girl (2004), Gigli (2003) and Jennifer Lopez? Are people assuming it’s going to be a horrible mistake to have Affleck play a superhero i.e. Daredevil (2003)?

Well guess what kids – those movies are over 10 years old and since then Affleck has given us The Town and Argo. The former opened at number one in theatres, earned over $23 million at the box office and Jeremy Renner was nominated for an Academy Award for Best Supporting Actor. The latter earned seven Academy Award nominations and won three, earned five Golden Globe Award nominations and won three and won multiple Screen Actors Guild Awards.

So what more do we want from him? Is it that people want Christian Bale instead? What is the big deal? Five actors have played Batman since 1989: Michael Keaton, Val Kilmer, George Clooney and Christian Bale. All five big stars and while some garnered better reviews than others, none of them caught nearly as much shit when they were announced.

It will be interesting to see what happens next with Cyrus and Affleck. Will people just roll their eyes at the endless Cyrus photos and go onto something new by next week or will this really affect her image? How long will the Batman backlash last? The movie isn’t even slated for release until July 2015 – almost two years from now! I’m assuming the chatter will dissipate and there will be other things to discuss between now and then – especially since we have social media to keep us up to date on all things crazy going on in the world of Hollywood.