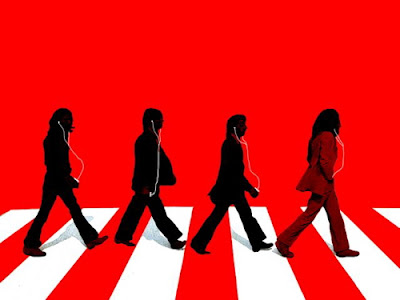 Yesterday (yes I started this post like that on purpose) the Beatles finally caved and put their albums for sale on iTunes and apparently the world is rejoicing. Although I’m well aware that I’m in the minority when it comes to my thoughts on the Beatles I’ll share them anyway: I don’t think they are as great as everyone thinks they are. I’ll wait a minute while you pick your jaws up off the floor – yes Mom, you too.

Even though I’m not a fan I’ll give credit where credit is due: The Beatles have sold millions of records, are music icons and there is no question that the four of them are legends. That being said, I think they are overrated. And I finally found someone who agrees with me – acclaimed writer Malcom Gladwell. You may recognize his name, as he is also the author of another very popular book, The Tipping Point, but I’m especially interested in Outliers because in it he helps me prove my Beatles theory.

In Outliers: The Story of Success, Gladwell examines the factors that contribute to high levels of success. To support his thesis, he talks about the causes of why the majority of Canadian ice hockey players are born in the first few months of the calendar year, how Microsoft co-founder Bill Gates achieved his extreme wealth and how two people with exceptional intelligence, Christopher Langan and J. Robert Oppenheimer, end up with such vastly different fortunes.

A common theme throughout the book is the “10,000-Hour Rule” which claims that the key to success in any field is a matter of practicing a specific task for a total of around 10,000 hours. Gladwell asserts that greatness requires enormous time, using the Beatles’ musical talents and Gates’ computer savvy as examples. The Beatles performed live in Hamburg, Germany over 1,200 times from 1960 to 1964, amassing more than 10,000 hours of playing time, therefore meeting the 10,000-Hour Rule. Gladwell asserts that all of the time the Beatles spent performing shaped their talent, “so by the time they returned to England from Hamburg, Germany, ‘they sounded like no one else. It was the making of them.’” Similarly, Gates met the 10,000-Hour Rule when he gained access to a high school computer in 1968 at the age of 13, and spent 10,000 hours programming on it.

While there are a few Beatles songs I really do like such as “Come Together,” “Can’t Buy Me Love” and “Penny Lane” I just see them as a boy band from the sixties. If they were a band of the nineties they would have been the Backstreet Boys or N’Sync. But millions of people all over the world love them and think they are the greatest band that has ever lived and now they can finally buy all the songs they want on iTunes. I guess yesterday was a good day for music after all.