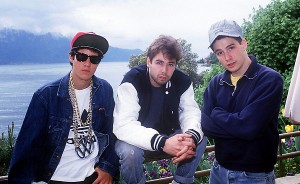 I’m sure the Beastie Boys never thought their 1987 single off their debut album Licensed To Ill would ever be part of a toy commercial. They thought wrong.

GoldieBlox, the toy company that creatively produced a commercial to advertise construction toys aimed at young girls, parodied the song without the group’s consent. Although I think the commercial is fun and very well done clearly not asking permission was a bad call.

The parody prompted an inquiry from the Beastie’s lawyers which was followed by a pre-emptive lawsuit from GoldieBlox filed for the right to spoof the song. But yesterday founder Debbie Sterling posted an open letter saying the company plans to remove the video and withdraw the lawsuit. The letter said that the company was unaware that the late Adam Yauch had requested in his will that Beastie Boys songs never be used in advertising. She also stated that although the company feels their parody video falls under fair use they want to respect the group’s wishes.

Surviving Beastie Boys Michael “Mike D” Diamond and Adam “Ad-Rock” Horovitz wrote in an open letter of their own that they decided as a group a long time ago not to use their music or name in product ads. The letter pointed out that GoldieBox not only used their song without permission, they also went on to sue the band.

I’m glad that the Beasties and GoldieBox were able to settle everything without some huge Michael Jackson-esque lawsuit that would drain everyone’s bank accounts. That would have been a shame and ridiculous. The Beasties have every right not to want their songs used in commercials but I’ve got to give the toy company credit – their advertising department knows what they are doing.