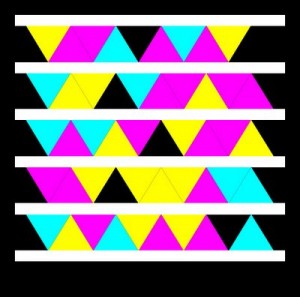 Until recently I thought that barcodes were the black and white squares you scanned on the back of products at grocery stores and record stores to pay for your items.  Clearly I’m behind on the times and clearly I need a Smartphone.  (Yes Marshall and J.Reed, I finally admit it).

If you open a magazine and pay attention there are now small colorful Microsoft “tags” that enable those with a Smartphone to snap a photo or scan the tag which will then take you to an accompanying web site or video.  Entertainment Weekly has included tags that will take you to summer movie trailers while Snowboarder features tags that will bring you to their web site.  Even advertisers are jumping on the barcode bandwagon which is a good move – it links those who are reading hard magazines to those who spend more time reading online.

Here’s how it began: High Capacity Color Barcode (HCCB) is the name coined by Microsoft for its technology of encoding data in a 2D “barcode” using clusters of colored triangles instead of the square pixels traditionally associated with 2D barcodes.  It has been licensed and serves as the basis for the Microsoft Tag mobile tagging application.

The technology was created by Gavin Jancke, an engineering director at Microsoft Research.  Jancke has said that HCCB was not intended to replace traditional barcodes. Instead, “it’s more of a ‘partner’ barcode” and that “the UPC barcodes will always be there.”  He continued, “Ours is more of a niche barcode where you want to put a lot of information in a small space.”  The Microsoft Tag reader is compatible for Internet-capable mobile devices including many based on the Windows Phone 7, Windows Mobile, BlackBerry, Java, Android, Symbian S60, iPhone and Java ME platforms.

The question is whether or not this little tag trend is going to catch on and I think that it already has.  Not only do these tags provide ways for the reader to learn more and see more, whether it’s a cool web site or the latest trailer for Hangover 2, it is also very cool.  Taking a photo with your cell phone that immediately directs you to a web site that contains information, photos and videos concerning something you already think is interesting?  Sign me up.  Now I just have to wait until my AT&T upgrade kicks in at the end of June so that (as my hilarious cousin and friends would say) I can join 2011.