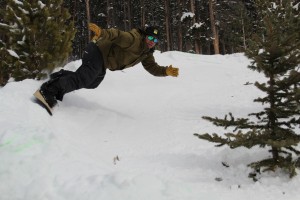 In the last year I’ve attended several banked slalom races and, although they were similar in a lot of ways, they all had their differences as well. While these races are not for me to compete in, my boyfriend and several of our friends participate and it’s always fun to see people you know take part in what I consider to be extreme races. I find banked slaloms interesting because even though they are timed races, what competitors are doing is more than just swinging around turns as fast as possible. Why? Because in addition to speed, these events are about finesse and understanding what it takes to literally stay on course. I’ve watched some of the most talented riders in Colorado skid off course during their trial run because they don’t/can’t know what to expect until they actually do it. Conditions change depending on the weather, visibility, and the number of times contestants have gone through the course. No one experiences the same run twice.

According to the World Snowboard Federation (WSF), a banked slalom brings snowboarders together in the original contest format because it combines surfing and skateboarding which are the roots of snowboarding. “The original sensation of that surf/skate banked turn on water and on land…We all experienced that feeling and we all share that moment.” Exemplifying the importance of banked slalom events, the WSF, which is the only international non-profit organization exclusively dedicated to develop the sport of snowboarding on all levels, launched the WSF Banked Slalom World Tour in October 2014. An international campaign created to promote and celebrate the history of snowboarding, the WSF Banked Slalom World Tour’s first edition featured 1,667 riders that crossed eight countries worldwide to compete in 20 events.

While banked slalom races have gained popularity over the last few years, these races are nothing new. Organized by Bob Barci (known as the father of NW snowboarding) and World Champion snowboarder and skateboarder Tom Sims, the first ever banked slalom race was held in 1985 at Mt. Baker in Washington state. A handful of spectators watched 14 competitors negotiate the 500-foot-long course that included 15 gates. The reason the original banked slalom race took place at Mt. Baker is because at the time it was one of the few mountains in North America that allowed snowboarding. Now known as the Mt. Baker Banked Slalom, or the Legendary Banked Slalom (LBS), the annual event is considered the precursor to the boardercross event. The race has been won by some of the most recognizable names in the history of snowboarding including Craig Kelly, Shaun Palmer, and Terje Håkonsen, who have all received the renowned Duct Tape trophy and embroidered Carhartt jacket.

Demonstrating the resurgance of banked slaloms, here is a list of the 2016 events that are in or close to Colorado:

Bull of the Woods

If you’re a fan of snowboarding do yourself a favor and check out one of these events. They are definitely something to see.