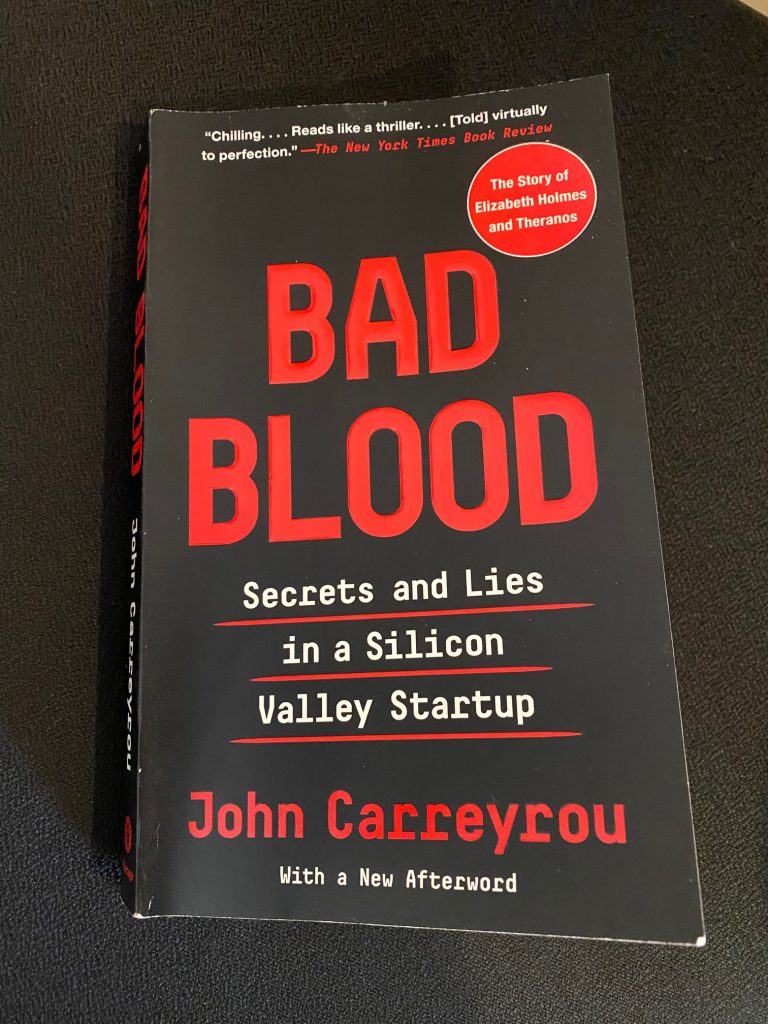 When my friend Stephanie suggested I read Bad Blood, the true story and number one National Bestseller about the meteoric rise and fall of Elizabeth Holmes and her company Theranos, I didn’t question her because she’s known me since seventh grade and is well aware of what I like to read: stories that demonstrate that truth is stranger than fiction. As per usual, her recommendation was spot on. The book is about Holmes, who dropped out of Stanford, came up with a revolutionary medical technology that was supposed to change the healthcare game, moved to Silicon Valley, and became a billionaire. Except she was a fraud and the entire thing was a huge scam that went on for a decade and a half. No one can make that up.

A few common themes throughout the book are that Holmes was so charismatic that people believed every word that came out of her mouth, she was obsessed with Steve Jobs, she inexplicably faked the tone of her voice, and she and her significant other Sunny threatened anyone who challenged Theranos. The people she stole money from were so blinded by her charisma, that they gave her millions of dollars without proof that her technology actually worked – and these people aren’t stupid. They are accomplished businesses men and women like Rupert Murdoch, the Walton (Walmart) family, and executives at Safeway and Walgreens, among a long list of others. All them got where they are today by making smart financial decisions and implementing them in strategic ways and still couldn’t see beyond the façade.

While people involved with Theranos acknowledged Holmes’ “quirks,” no one thought any of it was bizarre enough to call her out because she was convincing, poised, young, and female. As Carreyrou explains, Holmes really did create a myth around herself that people ate up. Additionally, Sunny – who was 20 years older and extremely sketchy – behaved more like a member of the mafia than an Executive Vice Chairman (whatever that means). High employee turnover and constant issues with paranoia, nondisclosure agreements, and secretive (aka illegal) behavior also characterized Theranos. She had bulletproof class installed at Theranos headquarters for crying out loud.

Other than the insanity that are the facts of the story, the reason this book is so compelling is that it was written by an exceptional journalist – John Carreyrou from the Wall Street Journal. After receiving a tip from a blogger about possible illegal behavior and practices at Theranos, he went to astronomical lengths to get the truth because that’s what quality journalists do. He was the only one with the guts to seek out the truth and arguably, if he hadn’t, Holmes would still be swindling millions from people all over the world. And, what’s worse, is that she and her bullshit technology could have killed who knows how many patients in the process.

Over the course of his three and a half years of investigation and writing, Carreyrou discovers that Holmes threatened anyone who got in her way and took insane measures to keep people quiet such as having them followed and bullying them with legal action. His thorough research provides detailed background information on those who were involved in this scandal and reveals how they got tangled in Holmes’ web. His investigation also demonstrates how she cut corners to avoid the FDA and other organizations that would have put her out of business and in jail. Additionally, there were many instances when Holmes simply wouldn’t respond when asked questions she didn’t like via email or phone call, and gave vague, evasive answers when asked in person. Her manipulation went on for years and affected countless people. Carreyrou also finds out that employees quickly realized that relying on Theranos blood tests was reckless and irresponsible but no one wanted to take on Holmes and Sunny. The two of them were that scary, intimidating, and intense. Red flags were everywhere but continued to be ignored due to the lethal combination of Holmes’ charisma and Sunny’s coercive tactics.

One of the most heartbreaking examples is George Schultz, an economist, politician, and businessman who served under three different Republican presidents including Ronald Regan. Not only did Schultz continue supporting Theranos as a board member as evidence was compiled that exhibited the company’s fraud, he also believed Holmes over his own grandson, and former Theranos employee, Tyler. Although Tyler ends up being one of Carreyrou’s key sources (and heroes of the story), Tyler went through months of legal torture (including threats to sue and surveillance) from Holmes and Sunny. Of all the unbelievable stories in this book, Shultz and Tyler is the toughest one because Holmes screwed the family both financially and emotionally.

When Carreyrou, his editor, and the general counsel for the Wall Street Journal’s parent company meet with Theranos during their investigation for the article, Carreyrou describes it like this: “I felt like I was watching a live performance of the Theater of the Absurd.” Because Carreyrou spends a great deal of time tracking down former employees who all had similar negative experiences at Theranos, he quickly learns that Holmes and Sunny were so intense about getting rid of people that the employees rarely had the opportunity to speak to one another about their concerns and were worried for their lives if they did. Also, the company’s prestigious board was extremely misleading to investors so everyone blindly defended the company and its fearless leader.

When Carreyrou’s article was finally printed in the Wall Street Journal, it became clear that many people had doubts about Holmes and Theranos but didn’t want to be the first to say anything. Carreyrou explains that the investigation and article were so important because “Holmes and her company had overpromised and then cut corners when they couldn’t deliver. It was one thing to do that with software or a smartphone app, but doing it with a medical product that people relied on to make important health decisions was unconscionable.”

My question is whether the narrative would have been different if Holmes was a man. Would everyone have been so mesmerized by a young man “creating a new technology” in Silicon Valley or would they have assumed he was another Mark Zuckerberg and not been as impressed. As Carreyrou points out, “she was the company’s most powerful marketing tool” because she was “an amazing saleswoman.” There was something about Holmes that made believers out of the most intelligent business minds in America. Carreyrou also explains that the fear of missing out was a powerful strategy because it persuaded people who were both smart and rich to invest. They didn’t want to miss out on the next big thing coming out of Silicon Valley that was slated to change healthcare forever.

According to the Bad Blood’s Afterword, the trial is scheduled to begin on July 28, 2020. Holmes and Sunny face twenty years in prison, a $2.75 million fine, and possible compensation to the victims of their scam. It will be interesting to see how all of that plays out. I’ll definitely be watching.