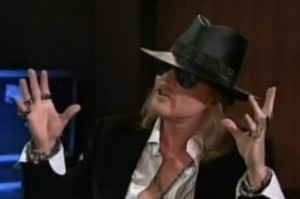 For the first time in 14 years Axl Rose did a live interview!  In person!  Talking with actual people about actual topics!  And the interview took place in Miami!

Clad in a collared shirt, black blazer, cowboy boots, lots of silver jewelry, aviator sunglasses and a cowboy hat, Axl appeared on VH1’s That Metal Show on November 11. And he sounded like a normal human!  He was talking about the past, the upcoming tour and more specifically about why he is always late for everything.  Turns out Axl is funny – he cracks jokes and has a sense of humor which is very good news considering I just dropped some serious money on tickets to see Guns N Roses (Version 2.0) on December 11 in Colorado.

A few of his quotes from the interview:

“A lot of times on the day of a show, things start going wrong.  No one knows why…but I think we’re getting better.”

“I lived right behind my school and couldn’t make it to class! I had a job at the grocery store down the street and was running down the block with wet hair trying to tie my tie with a sandwich in one hand!”

If you go on YouTube to check out the interview don’t be surprised that Axl looks and sounds a little older – he will be 50 years old in February. (Resist the urge to feel like a dinosaur).

A lot of people are giving me a hard time about spending my hard earned cash on seeing Guns Version 2.0 but I need to see Axl.  I’m such a fan – I have his words tattooed on my ankle for crying out loud – and I’ve seen Slash and Duff McKagan before.  But never have I ever seen the notorious Axl live.

So cross your fingers for me on December 11 – hopefully Axl shows up wearing his signature aviators and is as charismatic as he was in his latest interview.