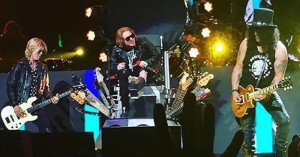 It’s been an interesting year for Axl Rose so far:

-Reunited with his old band and announced a tour called “Not In This Lifetime” that will visit massive stadiums, parks, domes, and fields across North America.

-Broke his foot while performing at the Troubadour leaving him unable to walk.

And the latest news:

Axl officially confirmed that he was asked by AC/DC to fill in as lead singer for the rest of their Rock or Bust World Tour and has complied. How did this all come about? Apparently AC/DC frontman Brian Johnson, who has been singing for the band since 1980, all of the sudden was told by doctors to stop touring immediately otherwise he would risk losing his hearing completely.

At the risk of sounding like a jerk, I’m having a hard time understanding how after over three decades of singing some of the loudest rock songs ever performed, all of the sudden Johnson is worried about losing his hearing. Based on the articles I’ve read it sounds like something else might be going on – I’m sure we’ll find out eventually. In the meantime, Axl, regardless of injury, is joining AC/DC for ten shows before the Gun N’ Roses tour begins.

“AC/DC band members would like to thank Brian Johnson for his contributions and dedication to the band throughout the years. We wish him all the best with his hearing issues and future ventures,” the band said. “As much as we want this tour to end as it started, we understand, respect and support Brian’s decision to stop touring and save his hearing. We are dedicated to fulfilling the remainder of our touring commitments to everyone that has supported us over the years, and are fortunate that Axl Rose has kindly offered his support to help us fulfill this commitment.”

The European leg of AC/DC’s tour begins on May 7 and runs through June 12. Following those dates with AC/DC, Axl will head out with Guns for the rest of the summer. He then will handle the vocals for the remaining ten U.S. shows that were postponed by Johnson’s unexpected exit.

If there are tickets still available and you want to see Axl fronting AC/DC, here are the dates/cities/venues that will be rescheduled:

Welcome back to the rock and roll headlines Axl!