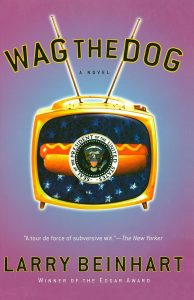 Regardless of the setting, I always enjoy watching and listening to another writer speak. Even when they aren’t trying to be authentic, they usually come off that way. Why? Because by trade writers always have something to say and a story to tell. Last night I attended a meeting where novelist Larry Beinhart spoke for an hour about his experience as an author and how what it means to be a writer has changed.

If his name sounds familiar it’s probably because he wrote the 1993 novel American Hero which theorizes that Operation Desert Storm was designed as a ploy to get George H.W. Bush reelected to a second term. Does a novel topic get any ballsier than that? The book also analyzes why people are fascinated with conflict which is interesting because 1993 obviously predated any type of social media, cell phone videos, or YouTube.

In 1997 American Hero was made into a movie called Wag the Dog which stars Dustin Hoffman, Robert De Niro, Anne Heche, William H. Macy, Denis Leary, Woody Harrelson, and Willie Nelson. Beinhart’s other novel that was turned into a movie, Salvation Boulevard, is about an Iranian-born Muslim who is accused of murdering his professor. Released in 2011, the film of that same name features Pierce Brosnan, Greg Kinnear, Jennifer Connelly, and Marisa Tomei.

These days, Beinhart is writing for online publications including the Huffington Post and Al Jazeera, and working on a few novels.

A few wise gems he dropped on us last night:

“Everything we do we organize as a narrative.”

“Write five pages a day – even if what you write is terrible – because you definitely can’t sell an unfinished novel.”

“Writing books has allowed me to spend more time creating and less time selling. Now things have changed – authors are expected to promote.”

Beinhart was funny, charismatic, and clearly an excellent storyteller. It was a pleasure listening to him speak and I feel lucky that, as a fellow writer, he gave me a few things to think about.