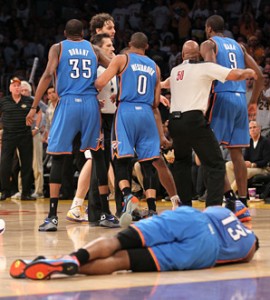 Ron Artest is an asshole. He is the class bully who steals lunch money, pushes kids into lockers and terrorizes teachers. And he gets away with it. Why? I have no idea. Is it because the marketing people at the NBA like the publicity and the controversy? If they do then they need to go back to school and learn that the phrase “all publicity is good publicity” is a myth. People always say that University of Miami football needs a PR makeover because their players behave as if they were chosen out of a lineup. Well it seems like Artest was pulled off that same lineup because never in my life have I seen a player act with such disregard for everyone around him. And by the way I refuse to refer to him as Metta World Peace. (Chad Ocho Cinco called and wants his horrible idea back).

As a point of reference, let’s look at the numbers in terms of suspensions for some of the more notable NBA players:

Artest, of course, has the most suspensions – 13 times for at total of 111 games.

Next on the list is Latrell Sprewell who was suspended for 68 games for attacking and threatening then-Warriors head coach P. J. Carlesimo during team practice. He was immediately suspended for ten games by the Warriors but then the team terminated Sprewell’s $23.7 million contract and he was subsequently suspended for a year (82 games) by NBA commissioner David Stern. Sprewell took the case to arbitration and the termination of his contract was overturned and his suspension was reduced to 68 games.

Brawls are an often-cited issue when it comes to suspensions in the NBA. Stephen Jackson and Jermaine O’Neal of the Indiana Pacers were both initially suspended indefinitely in 2004 for their involvement with the Pacers/Pistons brawl. The next day their suspensions were reduced to 30 and 15 games, respectively. In 2006 Carmelo Anthony was given a 15-game suspension for his involvement in the Knicks/Nuggets brawl.

So with those examples in mind how can the NBA possibly give Artest, who smacked his elbow into James Harden’s head causing him to fall to the ground, a mere seven-game suspension? Are you kidding me? To make matters worse, as Artest was talking with the refs (i.e. undoubtedly arguing that with a name like “World Peace” on this jersey how could he possibly have done something like that on purpose) he literally pounded his chest like a baboon.

After the shot to Harden’s head, one of the game commentators said, “What a disgrace.”
My thoughts exactly. David Stern needs to get Artest the hell out of the league. He is a menace to the NBA and a joke of a human being.