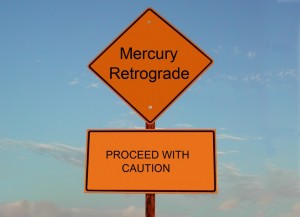 I can’t even believe I’m even writing about this but evidently there is no denying that Mercury is in retrograde. When I first heard about this from my radio co-host I thought it was a bunch of hippie bullshit. I was wrong. So wrong. As my co-worker just brought to my attention, “you can’t argue with the stars.” Fair enough.

Now it’s your turn to be enlightened:

According to the Old Farmer’s Almanac, sometimes the other planets appear to be traveling backward through the zodiac but that’s actually an illusion and the illusion has a name –retrograde motion. Three times a year, it appears as if Mercury is going backwards for about three weeks. So yeah, nine out of 52 weeks each year things are going to be crazy. Awesome.

The Almanac also says that this insane retrograde time is traditionally associated with confusions, delay and frustration. Yep, sounds about right.  It goes on to explain that Mercury’s retrograde periods can cause our plans to go awry.  But it’s not all bad news because it can also be the best time to reflect on the past. Additionally, intuition is said to be high during these periods and “coincidences can be extraordinary.”

Because the planet Mercury rules communication, travel, contracts, automobiles, etc., when Mercury is in retrograde, we need to “remain flexible, allow time for extra travel and avoid signing contracts.” The Almanac also recommends reviewing projects and plans at these times, but waiting until retrograde is over to make any final decisions. Also keep in mind that it’s best to finish tasks and projects about a week or two before Mercury retrogrades because, although we can’t stop our lives, we need to plan ahead, have backup plans and “be prepared for angrier people and miscommunication.”

Although I try to avoid blaming that which is out of our control (i.e. the weather) from what I and those around me have experienced recently, retrograde is no joke. The Almanac says we should take this time to sit back and review where to direct our energy and take time to reflect. Fine – I will take deep breaths and do my best to stay calm.

Here are the Mercury in retrograde dates for 2015:

At least the first set of dates is over and we’re almost done with the second set. Today is June 4 so we have seven more days until this craziness is over. Who’s counting with me?