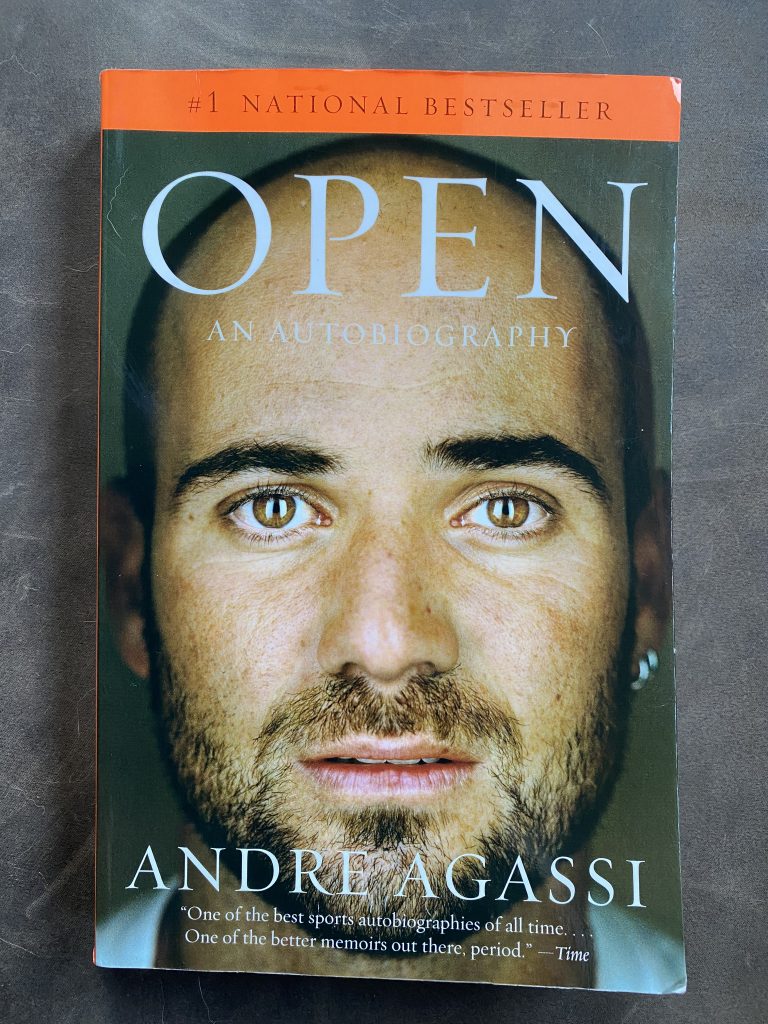 From page one. Literally page one, paragraph three, Andre Agassi admits he hates tennis. His hatred of the sport that made him arguably one of the most recognized figures in tennis is also a major theme throughout the book. Published in 2009, three years after Agassi retired, Open is one of the best autobiographies I’ve ever read. His sharp use of language and attention to detail is phenomenal. Even the title is loaded with metaphors, the obvious one being a nod to tennis tournaments. Open also refers to various instances and opportunities Agassi resisted because he wasn’t open to them and how it took him a long time to open up about physical characteristics like his hair, among other issues regarding his family and torment from the game. But loathing tennis is definitely the most significant thread that bookends (see what I did there) his story. There are several conversations he has with people that go like this: “I hate tennis.” “You don’t actually hate tennis.” “I really do.” When they initially hear it, no one believes he actually hates the sport – not Gil (his trainer), not Brooke Shields (his ex-wife), not Steffi Graf (his wife, best friend, and mother of his two children), and not even Kevin Costner (they used to hang out)!

Like several of the biographies, autobiographies, and memoirs I’ve read, this one starts with a son of a bitch parents whose anger and inexplicable behavior determines the course of the subject’s life. Agassi’s father is a tyrant who forced him to play tennis and pressured him to be number one after his first three kids couldn’t hack it. To say that Mike Agassi is a monster is an understatement. Growing up in the desert of Las Vegas, Agassi endured Mike choosing a house for his family based on whether a tennis court could be built in the backyard. He is certifiable. He encourages his son to skip school, tries to give him speed (without telling him what it is) so he’ll hit the ball harder, and creates a machine that fires balls at his son repeatedly so he will learn how to return serves. It’s insane. As a child, Agassi wants to play team sports because tennis is so lonely but, of course, his father won’t have it. Eventually young Agassi is sent to a boarding school, which he describes as a prison, where parents send their tennis prodigy children to focus on the sport. Agassi despises it there, and feels like he was completely abandoned. Also, because tennis is deemed the sole aspect of life that’s important, his father and the school allow him to leave with only an eighth-grade education. Unbelievable.

Another theme is choice. Throughout the book, Agassi repeatedly mentions his lack of choices. Even though he despises tennis he has to play. What other choice does a middle school dropout have? Fair enough. Inspiration is another thread that weaves throughout Open as Agassi is always looking to be inspired – inspired to win, to enjoy tennis, etc. – and he struggles with all these issues because he didn’t choose to be a professional tennis player. He didn’t choose it, it chose him, or his father chose it for him, and that is what he’s good at it, so he’s stuck. Lack of choice and the constant yearn for inspiration leads to inner turmoil and a bad reputation for being rebellious in a sport that doesn’t tolerate that sort of behavior. Agassi uses Open to explain the roots of the rebellion. In fact, maybe it was the initial reason why he wrote the book – to clear up decades of misunderstanding.

Speaking of misunderstanding, his hair practically functions as its own character. It represented so much of his image but was also his Achilles heel. In 1995, Shields convinces him to shave it and he realizes that it was a physical and mental shackle that restricted his life and his tennis game. In short: hair gone = playing better tennis. “Newspaper go to town with my new look. Everyone has an opinion.” As his career goes on, he finally discovers that giving back provides the kind of inspiration he’s been looking for and, as a a result, he is very serious about it. He starts the Agassi Foundation and then the Andre Agassi Preparatory Academy which, since 2001, has provided underprivileged kids with the chance to get a quality education. And it’s located right where Agassi grew up – the Vegas desert. Obviously I’m a huge proponent of education, but the value of education was instilled in me at a young age. Agassi had to learn the value of education by not having one. In the late 90s, when the school is being built, he plays longer and extends his career to raise money for the school. One track mind on the right track.

Although I’ve always been an Agassi fan – I had the privilege of watching him play a few times in Miami when I was a kid – this book definitely made me more of a fan. First of all, Agassi uses one of my favorite writing styles. I’m sure it has a name but I always refer to it as the “Hemingway Method” – thoughtfully written short sentences that have a lot of meaning. Throughout the book, Agassi’s use of these truncated sentences lends to his funny details and anecdotes nicely. He does it with describing how his horrible father makes him feel, using song lyrics to punctuate what’s going on in his life (“Signs, signs, everywhere signs”), and clever quips that demonstrate Agassi’s observant and attentive nature. He seems to notice all the minor details which makes for excellent storytelling. Additionally, his self-awareness is intriguing and funny. He constantly asks himself, “Is this really my life?” and “Is this really happening?” Agassi’s writing humanizes him as the conversational but acute style makes the reader feel like he is a normal person rather than a global tennis star. Additionally, his shrewd writing is descriptive without overdoing it.

In the last section of the book, Agassi explains that Pulitzer Prize winner J.R. Moehringer helped him write Open. Agassi read Moehringer’s Tender Bar during his final US Open in 2006 and couldn’t put it down. But he forced himself to ration it because he was afraid “the book would run out before [his] career did.” Tender Bar is next on my reading list. Now that I think about it, both Hemingway and Moehringer are former journalists who became novelists. No wonder I like their writing styles so much!

The last few chapters of Open are about Agassi, Graf, and their children, and how important spending time with his family is to him. Equally important is not building a tennis court in their backyard. In 2003, he is one of the favorites at Wimbledon and he asks himself how that is possible since “fathers don’t win slams.” When you’re Andre Agassi they do.