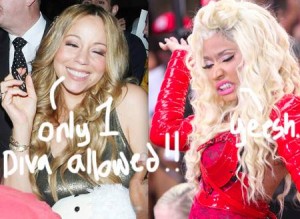 Reason #476 that indicates the downfall of American Idol: Recently appointed judge Nicki Minaj was caught on camera yesterday screaming at fellow recently appointed judge Mariah Carey. Apparently, during auditions in Charlotte, North Carolina, Minaj disrupted everything when she began throwing a fit that was directed at Carey. Minaj also verbally threatened Carey by saying things like “I’m gonna knock you out” and “I told them I’m not (expletive) putting up with her (expletive) highness over there.”

Then Carey can be heard saying, “Oh why, WHYYYY do I have a three-year-old sitting around me? I can’t see my kids because you decided to act like a little crazy (expletive).”

And all of this is on film: http://www.youtube.com/watch?v=R25ypkQx7ac

First of all it’s hilarious that the biggest reason Minaj looks like an idiot in this video is not because she looks like she stuck her head in a cotton candy machine. Instead it’s because she is mouthing off to someone she is going to be working with for months and months and the process has only just begun. Even though I’m not a fan of Randy Jackson I feel bad for him because he was subjected to this nonsense and I feel even worse for Keith Urban (who I love of course) because he was literally in the middle of a bitchy catfight from hell. He probably got on the phone with his wife (Nicole Kidman) and asked her if there was any way he could get out of his new judging gig before it even starts.

So what does this mean for the new group of Idol judges and for the show in general? As I’ve said before I think the show has absolutely lost its luster. Although I like Phil Phillips (last season’s winner), he hasn’t really become a huge star. In fact the last winner to really become a big recording artist is Jordin Sparks from the 2006 season. That’s six years ago for crying out loud! That being said I never really expected Idol to produce big stars – I think Kelly Clarkson and Carrie Underwood were the exceptions that give the show credibility but they might as well have won 100 years ago (2003 and 2005 respectively). At this point Idol has merely become a talent show and there is no reason to televise it. They put these kids through hell for way too long and then they never really hit it big.

I know I’ve said this before but it’s time to shut down the Idol machine and turn all the attention to The Voice. Better show, better talent and what they have the contestants do is much more realistic and conducive to what they will need to do if they want to succeed in the record business. Also, the judges have fun, witty banter rather than freakouts that become public knowledge. It’s time to hang it up Idol – you’re now doing a disservice to the music business.