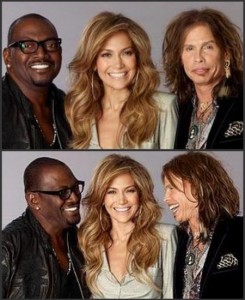 Back in September I wrote about the surprising selection of the two newest American Idol judges – Steven Tyler and Jennifer Lopez – and what the new blood would do for the show.  I mentioned that no matter what, the January premiere would be big because regardless of what you think about Tyler, Lopez, Randy Jackson, Ryan Seacrest or the show in general, the amount of publicity this whole thing has gotten is out of this world.  In fact, last night’s 10th season premiere began with news clips gathered from the last several months featuring reporters talking about who would be the new judges.  No question that those clips were indicative of the level of pop cultural importance American Idol has reached – the show is literally in the news all the time.

After watching last night’s premiere – which kicked off the Tyler/Lopez era – I must say that I was impressed.  First of all (and I know this is the least shocking thing ever) I love Steven Tyler.  I just love him.  I love his mouth, the feathers in his hair, the way he dresses and most importantly – that voice.  Wow.  Although most of the female contestants he was talking to/flirting with were young enough to be his daughters/granddaughters, I liked what he had to say.  He can recognize talent from a mile away and he feels music in his soul.  He is the epitome of what American rock and roll is all about and I can’t get enough of it.  The more surprising portion of the program was how NOT annoying Jennifer Lopez was.  Granted there’s only been one episode so far but I found her to be intelligent, fair, honest and kind – almost as if she checked her “Jenny from the block” bullshit at the door.  I thought she was real and I also liked what she had to say.  As for Randy “Dawg” Jackson – he’s fine.  I can take him or leave him.

Now, judges aside, what people really are looking for from American Idol is new talent, right?  Kids from all over the country (and apparently the world as there was a girl from Kosovo) find a way to get to these auditions and get up the nerve to sing in front of three people that could make or break them.  Some of the contestants are so bad that I literally thank my lucky stars that I have a DVR which allows me to fast forward right through those people, while others are so unbelievably good that they make me cry like a little girl.  Yeah, I said it.  My name is Laura Lieff and some contestants on American Idol make me cry.  But let me be clear: I’m not tearing up because of their publicity stunt back stories, I’m tearing up because these kids want this so bad and when they get a golden ticket to Hollywood they are so excited that they can’t believe it.  Plus, seeing new talent hitting high notes, doing what they love and doing it well is amazing.  It reminds me again and again how much I love music and why I love music.

So here’s to 2011 being the best season of Idol yet – talented judges changing the lives of incredible singers from the corners of the world.