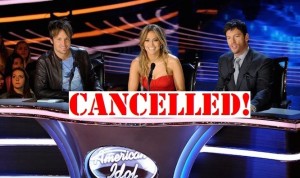 What is going on with television shows giving their notice a year in advance? When people leave jobs it’s customary to give at least two weeks. In the world of television apparently 365 days is the norm. David Letterman gave his notice 13 months in advance and now the powers that be at American Idol announced two days before the 14th season finale that although the show will return in January 2016, it will be the last season.

Although I’ve written about the show a few times, and used to watch it, I have mixed feelings about American Idol. In 2013 I wrote about how Nicki Minaj and Mariah Carey were the worst judges ever and how they were ruining the show by making it about them and not the contestants. Also, at that point The Voice was showing everyone what a real music competition should look like – that it should be showcasing talent rather than unnecessary antics. But back in 2011, when Steven Tyler and Jennifer Lopez became judges, I talked about how excited I was for the former and my opinion on the latter would remain to be seen. Turns out they were both fantastic and all of the sudden the show was relevant again. Lopez’s kindness and thoughtful comments were a welcomed addition and everyone loved Tyler and his crazy, tongue-twisting remarks. However, his slightly inappropriate comments to female contestants could have been dialed back a bit. You’re a rock star – we get it. No need to say anything else.

Anyway, I haven’t watched the show in years because I got tired of the same prepackaged, glossy, overproduced antics. Also the ever-increasing whiteness of Ryan Seacrest’s teeth became more and more alarming.  That being said I have heard that since Keith Urban and Harry Connick, Jr. joined Lopez as judges the show has been much more tolerable. Even though the show has an expiration date, those judges must be doing something right since we haven’t heard about any Minaj/Carey-esque drama.

While I think American Idol has most definitely run its course, it is pretty amazing that a singing competition has been on the air for 13 years. What’s even more amazing is that the show launched careers of huge stars including Kelly Clarkson, Carrie Underwood, Jennifer Hudson, Taylor Hicks, Jordin Sparks, David Cook and Adam Lambert. My favorites are the first three for sure and they are so successful that at this point I think a lot of people forget they were ever on a singing show. Clarkson has won 62 awards and earned 87 nominations, Underwood has won 130 and has 186 nominations and Hudson has won awards for both singing and acting and is one of only six women in history to win an Academy, British Academy Film Awards, Golden Globe, Screen Actors Guild and Critic’s Choice Award for a single performance.

Since it began airing in 2002, American Idol has become one of the most successful shows in the history of American television and in its first 10 years, the show spawned 345 Billboard chart-topping songs. For eight consecutive years, either its performance or result shows were ranked number on in U.S. television ratings. Those are some impressive numbers so it will be interesting to see what happens in a post-American Idol entertainment world. Will another show with a similar format pop up and replace it? Will The Voice completely take over and enjoy a 15-year reign as well? A significant amount of star power has come from this show so hopefully future talents will find a way to get their music heard. Maybe it will be through YouTube or another form of social media – either way I hope unknown talents are driven enough to make it happen without judges.