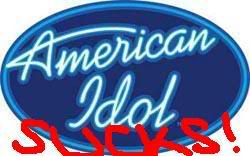 Twelve years of comments like “Yo,” “Dawg,” “In it to win it” and “pitchy” are finally over! Randy Jackson, the sole holdout from the original cast of judges on American Idol, is leaving the show after this season comes to a close. Randy I beg you; please take the show with you when you go! American Idol needs to put to rest along with all its bloated, over-dramatic nonsense and let The Voice be the only signing competition on television.

The only aspect that’s remotely interesting about Jackson’s departure is that the other judges are leaving as well which means that after only one season Nicki Minaj, Mariah Carey and Keith Urban are done with the show. Could it be because Minaj and Carey hate each other and are always trying to out-diva one another? Or is it because they can’t seem to make it to the show on time? There were several instances where Minaj arrived halfway through the show or Carey’s entourage was blamed for her tardiness. Get a grip. You’re making millions just to give your opinion and you can’t bother to get your ass in the chair on time?

Salaries: Carey raked in close to $18 million, Minaj made almost $12 million and Urban’s take was a reported $6 million for the season.

While I think shaking up the cast of judges is a generally a good thing (i.e. bringing in Shakira and Usher to replace Christina Aguilera and CeeLo Green on The Voice) at this point I don’t think anything can save this show. Between the cheesy car commercials, transparent attempts at showing the audience how Idol “gives back” to the community and making the contestants sing songs that are part of a theme rather than what works for their respective voices, it’s become the equivalent of a middle school talent show.

And it’s not just me who has this opinion – last month American Idol averaged a 4.3 rating in the adults 18-to-49 demographic, its worst showing since its debut season in 2001. Conversely, The Voice reached a 5.2 rating in the same demographic while Idol dropped to a series low 2.8 in the same week.

Hey Television Powers That Be: Take a hint and let’s make this a one singing competition world. Trust me; we’ll all be better for it.