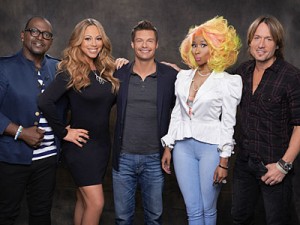 Although this new season of Idol has garnered a lot of press due to the new crop of judges there is one simple fact that remains the same: The show sucks!

Everyone (including me) was excited when Steven Tyler and Jennifer Lopez joined the show a few seasons ago and although Tyler offered some hilariously inappropriate one-liners and Lopez confirmed she is in fact a human and not a plastic ice queen, the show is still not what it used to be.

As I’ve said before, Idol needs to hang it up and/or take some serious notes from The Voice. The latter is a more successful show because it finds better talent, does not bring on nutjobs for the sake of a YouTube clip, the judges are witty and compatible rather than bitchy and weird and I really believe that it gives the contestants what they need to make it in the record business. In fact I’m wondering if the show took a lesson from Blake Shelton’s popularity when they chose to hire Keith Urban. I bet they did and I really hope that he brings some sanity to the group because at this point all we’ve really heard about is the diva twins Mariah Carey and Nicki Minaj which begs the question: When did this show become more about the judges than the contestants?

Clearly Carey is a big deal. She used to have a five-octave vocal range and has sold 200 million records worldwide making her one of the best-selling music artists of all time. In addition, she is the third best-selling female artist in the United States with 63.5 million certified albums. She has also won five Grammy Awards, 17 World Music Awards, 11 American Music Awards and 31 Billboard Music Awards. That being said Carey is also known for her public meltdowns and all-around struggles that took place between 2001 and 2004 which included a TRL striptease and the epic disaster that was Glitter.

Another Idol judge who is no stranger to publicity is Minaj who came on the music scene in 2010 and is the first female solo artist to have seven singles on the Billboard Hot 100 at the same time. Her seventh single “Super Bass” has been certified quadruple-platinum by the RIAA, and has sold more than four million copies, becoming one of the best-selling singles in the United States. While her super-speedy rap style and affinity for neon hair usually earns her magazine coverage, she has definitely caused some controversy whether it was for including walking down the red carpet at the 2012 Grammy Awards with the “Pope” and then performing an exorcism of her alter ego “Roman Zolanski” during the actual show, showing her nipple on Good Morning America and feuding with fellow musicians such as Lil Kim and Funkmaster Flex.

In October we saw the first signs of Carey and Minaj turning into a two-headed diva monster when they were caught on camera during auditions in Charlotte, North Carolina. The video shows Minaj disrupting everything by throwing a fit that was directed at Carey. Minaj also verbally threatened Carey and said things like “I’m gonna knock you out” and “I told them I’m not (expletive) putting up with her (expletive) highness over there.” Then Carey can be heard saying, “Oh why, WHYYYY do I have a three-year-old sitting around me? I can’t see my kids because you decided to act like a little crazy (expletive).”

It was so ridiculous it was funny and most likely surprising to no one since a) the two of them are probably more high maintenance than we can even imagine and b) this is what Idol has become – more about controversy and ratings rather than producing actual singers.

So we’ll see how tonight’s show goes. Will Carey and Minaj actually make quality observations about the contestants or will they be too busy fighting for the spotlight? Will Keith Urban swoop in save the day or will he be drowned out by the two-headed diva monster? Will people remember that Randy exists? If you can stomach it tune in tonight to find out or better yet DVR the show so you can fast forward through all the nonsense.