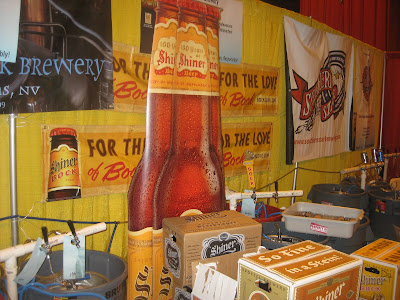 Unless you aren’t a Denver resident, going to the Great American Beer Festival (GABF) and not volunteering is a huge mistake. With over 400 breweries presenting booths and vying for medals, GABF is the largest commercial beer competition in the world. In short, it is the Super Bowl of beers contests. Breaking all of its pervious ticket sales records, the GABF sold out five weeks in advance to thirsty people eager to try approximately 3,000 different beers under one roof.

Attracting 151 beer judges from 10 countries, award-winning brewers have the chance to win prestigious gold, silver and bronze medals in 79 beer categories. If you want to take part in this three-day beeraplooza then you’ll have to be willing to pay $55 a night – unless you plan ahead and find a way to volunteer. In my case, I was lucky. Rod’s boss has been volunteering at the GABF for the past few years and invited me to join them. When I agreed to volunteer I didn’t know what to expect but figured it might resemble wine festivals I’ve attended in the past. I was kind of right. Sort of.

First of all, the GABF takes place in the Denver Convention Center to accommodate thousands of people who are ready to drink. (And also so the big blue bear could watch in awe). While some had a very short distance to travel such as the rowdy locals on the light rail, others traveled from other states such as Las Vegas, California, Texas, etc. for the ultimate weekend of boozing. Knowing that the number of attendees would be close to 50,000, GABF-goers started getting in line early but as the time crept closer to 5:30 p.m. the line wrapped around the convention center and down two blocks. As a volunteer, not only do you not to have pay but you also don’t have to wait in that horrifying line. Instead, volunteers get their own entrance and get to waltz in without any hassle. Once inside, the fun begins.

Each volunteer is part of a team (we were the Mile High Tappers) and is assigned to a brewery. Our jobs were to pour different kinds of beer for all walks of life. While some attendees were very polite others felt the need to bang their one ounce glasses around as they demanded to taste as many beers as possible. There were also people in costume, whether it was matching t-shirts with funny sayings like “I don’t get drunk, I get awesome” or candy-colored hats and glittered Elton John glasses. People were stoked to be there and ready to drink.

That being said, getting too wasted at the GABF is a rookie maneuver whether you’re an attendee or a volunteer because if someone sees that you are too drunk to function they will escort you out. Team captains watched to make sure volunteers only poured the allotted tasting amount and made sure no one was getting too tipsy. A popular way to avoid this happening is to wear necklaces made up of snacks like pretzels, cheese, sausages, crackers and whatever else people can put on string. Not only is it festive but it’s very smart. As we all know eating is key when you’re going to be drinking.

All and all my first GABF experience was great. I met a lot of fun people and talked to brewers from all over the country. In addition to tasting good beers, the people-watching is also a fun aspect of the event. Beer lovers from across the nation gathered to taste beer and have a good time – it’s really something to see. And I’m not even a beer drinker! Given the opportunity I will definitely volunteer again next year because being part of the event while participating in the event is definitely the way to go. Plus, it’s nice to get to do everything for free. The Great American Beer Festival is listed as one of the top 1,000 places in the US to visit before you die and now I can see why that’s the case. See ya next year for the 30th Anniversary!