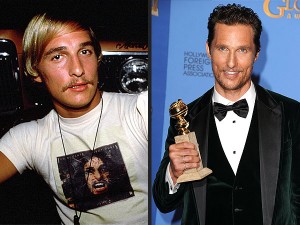 Those words have made a comeback this year as has the person who famously said them almost 20 years ago. To say Matthew McConaughey is having a moment is a severe understatement. The guy is having a monumental year and we all know why – he finally decided to leave the romantic comedies to other actors and find roles that dared him to dig deep. And dig deep he did.

Released in November 2013, Dallas Buyers Club takes place in Dallas in 1985. Starring McConaughey, the film tells the story of electrician and hustler Ron Woodroof who works around the system to help AIDS patients get the medication they need after he himself is diagnosed with the disease. McConaughey’s staggering performance earned him the Golden Globe and Academy Award for Best Performance by an Actor – both of which were firsts for him.

In December 2013, McConaughey played Mark Hanna in The Wolf of Wall Street which is based on the true story of wealthy stockbroker Jordan Belfort. Directed by heavy-hitter Martin Scorsese, the movie showcases the rise and fall of a life involving crime, corruption and the federal government. Both films earned high praise from both critics and audiences and McConaughey’s performances were the talk of each one.

Completing the McConaughey trifecta of amazing, True Detective debuted on HBO on January 12, 2014. And what a debut it was. Starring Woody Harrelson as Marty Hart and McConaughey as Rust Cohle, this show has become as addictive as the substances its characters abuse. Although both actors have given award-worthy performances in every episode of the season, McConaughey in particular has shown range that keeps your eyes glued to the television (see: https://lauralieff.com/true-detective-gnarly-brilliant/).

To be fair, McConaughey hasn’t always been the go-to romantic comedy guy. In 2011, he starred in Lincoln Lawyer which I loved and in 2012 everyone fawned over his performance in Magic Mike. Back in 1993 he produced the most memorable, quotable and funny performance of all the big deal actors in Dazed and Confused which included Ben Affleck, Parker Posey, Mila Jovovich and Jason London, among others. As David Wooderson, the too-old-to-be-hanging-with-high-school-kids character who makes the girls swoon, McConaughey delivered the best lines of the movie – all of which people still quote 20 years later!

The best of the best:

“That’s what I love about these high school girls, man. I get older, they stay the same age.”

Two years after his hilarious turn in Dazed, McConaughey took on a very serious role in A Time To Kill as a lawyer in the south who defends a black man accused of murdering the two men who raped his 10-year-old daughter. Although I think the hair and makeup people could have taken the sweat factor down a few notches (it’s hot in the south – we get it), the premise, the acting (Sandra Bullock, Samuel L. Jackson, Kevin Spacy, Oliver Platt, Donald and Kiefer Sutherland, Ashley Judd are all very impressive) and McConaughey’s closing argument were flawless.

So what will McConaughey do next? Will he continue on his path of playing gritty, complicated characters or will he do something completely different? Either way I’m excited to see what’s next. At 44-years-old he is on a roll that hopefully keeps going.