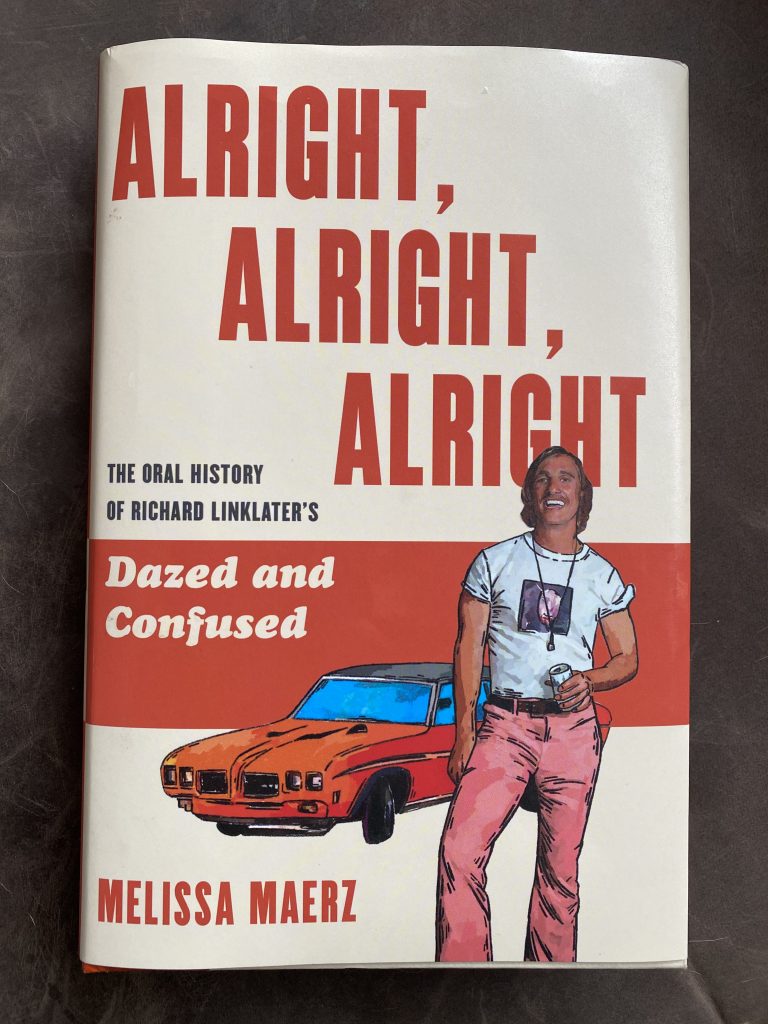 Anyone who has been paying attention to pop culture over the last 20 years knows that “Alright, Alright, Alright” is from the movie Dazed and Confused and that Matthew McConaughey’s character Wooderson says it. Even though you’ve heard that line 1,000 times, it never gets old. (I bet you are hearing him say the words in your head as you read!) And now it’s the title of a book by Melissa Maerz (who is married to Sex, Drugs, and Coca Puffs author Chuck Klosterman) that explores how the film came to be and how some of the then-unknown cast became movie stars.

Published in 2020, the full title of the book is Alright, Alright, Alright: The Oral History of Richard Linklater’s Dazed and Confused. I always find the term “oral history” interesting because instead of most of the content being written and analyzed by the author, the bulk of it is comprised of firsthand quotes from people who were there to witness whatever was going on. The difference between an oral history and written history is this: the former encompasses the points of view/memories of the people interviewed, while the latter uses a variety of sources including interviews, articles, letters, and journals.

What’s interesting about oral histories is that the authenticity of the book hinges on what the people involved remember to be true. Unfortunately, Alright, Alright, Alright, contains many instances where one cast member tells a story about something that happened and the next quote is another cast member, or the director, completely disagreeing. While the conflicting memories are funny in some cases, in other instances it gets redundant and annoying.

That being said, the Dazed cast was in their 20s when the film was made and now they are in their 40s and 50s – clearly, it’s been awhile since they were in Austin filming. Also, they talk about how everyone was stoned all the time so who knows if anything they say is accurate! The only person who seems to have a legitimate recollection of what happened is the director, Richard Linklater, who often disagrees with and/or clarifies certain stories or accounts throughout the book.

What I enjoyed most was the short sections that begin each chapter because that writing demonstrates Maerz’s thoughtfulness and shows that she is able to see the details as well as the bigger picture. She understands how to analyze aspects such as the under-the-radar brilliance of McConaughey’s performance, the fact that Dazed makes viewers nostalgic for both 1976 and 1993, and how Linklater’s ability to make the moon tower party look like an actual high school party makes viewers want to “hang out” with the characters again and again. “The movie is a period piece, but the period isn’t the 70s – it’s the period in everyone’s life from age 14 to 17.”

That analysis is what kept me reading. I wanted more of her thought process and less of Ben Affleck talking about his baby fat. The author also points out that “unlike most high school movies, no lessons are learned in Dazed, and no lives are changed.” So true! I also find it interesting how integral McConaughey was to this movie which is a fact that is remembered well by every cast member. Additionally, there are many instances where he is described as solving problems caused by other cast members – namely Shawn Andrews – who most people haven’t seen since the movie.

And then there’s the soundtrack which, as Maerz points out, “has become just as iconic as the movie itself.” Of course I find the music aspect fascinating – especially since Linklater knew the soundtrack would define the film. He was right and it sold over two million copies. As a result, “Dazed is now remembered as one of the greatest rock and roll movies of all time.”

While Linklater does not have the most positive memories of making the movie, whether he likes it or not, it is arguably his most memorable film. His resume also includes Slacker (which Maerz spends way too much time talking about), Before Sunrise, Before Sunset, Before Midnight, and, surprisingly, School of Rock. As Linklater points out, “Teenagers can’t express themselves very well, so music is their voice. Music expresses their emotions. That’s why it means so much to them.” No truer words.

One aspect I could have done without is all the script excerpts. Who cares? All those pages did was add more bulk to an already bloated 422-page book.

I’m glad that Maerz addresses what I despise about the movie – the paddling and the hazing. I get that unfortunately physical violence was part of a lot of people’s high school experiences, but it played too much of a role in Dazed – to the point where unless I can fast-forward through some of those scenes I don’t want to watch the movie.

It’s interesting that so many actors auditioned before they were big names: Jared Leto, Reese Witherspoon, Denise Richards, Mark Ruffalo, Hilary Swank, Jennifer Love Hewitt, Ron Livingston, and the list goes on and on.

McConaughey is given a lot of real estate in the book which makes sense since he is  arguably becomes the biggest name with the biggest career. Other top contenders are Renée Zellweger (even though she had zero lines), Ben Affleck, and Parker Posey. While Jason London found success with Party of Five, Cole Hauser was in Good Will Hunting and is now in Yellowstone, and Joey Lauren Adams was in movies like Chasing Amy and The Break-Up throughout the 90s and into the early 2000s, they didn’t become award-winning movie stars.

McConaughey’s character is not only on the cover of the book, the title of the book is his line. Also, Chapter 7 is all about him and his family which I find fascinating. His father passed away out of nowhere during filming which of course changed the trajectory of McConaughey’s life. He also made a small character, who could have been forgotten or vaguely remembered as creepy, into the most memorable person in the movie. “He brought a nonthreatening charm to Wooderson, an ancillary character that could’ve easily skewed dark…He’s the kind of guy who has located the tipping point between bad jokes and actual dangerous behavior and has decided to stay just on the right side of that line.”

“It’d be a lot cooler if you did.” A guy Linklater met in Montana used to say it!

Jason Lee, who was a professional skateboarder then and, as we know, became an actor, was Marissa Ribisi’s (who played Cynthia) boyfriend at the time of filming.

Marissa is the sister of actor Giovanni Ribisi.

Linklater was rejected by the University of Texas and UCLA film schools.

If you’re a fan of the movie, and the stories behind how the movie got made, read the book. But you can definitely skip over every script excerpt and focus on how, 28 years later, Dazed continues to be part of the pop culture lexicon.