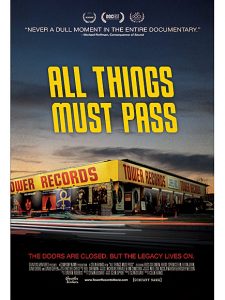 Record stores represent my childhood so when my mother told me about Showtime’s documentary about longtime retail giant Tower Records I clearly needed to watch it. All Things Must Pass: The Rise and Fall of Tower Records tells the story of a company that was the brainchild of founder Russ Solomon, a big personality with big dreams who became a staple in the music business. Featuring interviews with Solomon, various members of the former Tower Records executive team, Dave Grohl, Bruce Springsteen, Elton John, Geffen Records founder David Geffen, and Universal Music Group executive Jim Urie, among others, the documentary provides a comprehensive history of how the company started, flourished, and then filed for bankruptcy in 2006.

When the music industry experienced a catastrophic shift in the late 1990s that signified the end of record stores, the shift also meant the end of an extremely important era in music. After 50 years, our family business, Spec’s Music, was sold in 1998. Although a few stores scattered around Florida and Puerto Rico still maintained the Spec’s name, the soul of the company was gone because the people who built it were no longer in charge. Corporate ownership meant uniforms instead of the distinctive styles of the former music-loving employees, fixtures that focused on pop music only instead of a variety of genres, and an overall sense of the death of a place where people made memories. That being said, people still shopped there. But in December 2012, when the flagship Spec’s store closed its doors after 65 years, the age of “going to the record store to visit your friends” (thank you Cameron Crowe) was really over.

Established in 1960 in Sacramento, California, Tower Records’ beginnings were similar to Spec’s as they initially specialized in mostly non-music items that eventually turned into all records all the time. Once a retail powerhouse with almost 200 stores in 30 countries on five continents, Tower started as a small-town drugstore and morphed into a chain of retail stores recognized and revered all over the globe.

My family was raised in records stores, worked in record stores, and learned the value of customer service and the power of music of record stores, so when it ended it was tough on us. But time moves on and all these years later my parents and I live across the country in the mountains of Colorado and still run into former Spec’s customers. Additionally, former employees created a Facebook page for Spec’s where they share photos and memories and my mother and I go to the only record store in Eagle County every year to celebrate Record Store Day and the industry we loved.

Although Spec’s was a much smaller company than Tower, I felt like I was watching the history of my family’s business as interviewees talked about people starting as clerks and then moving up to managers and buyers, Solomon being adamant about not having a dress code for employees, and how Tower stores became social epicenters where people hung out for hours looking through records with their friends. Even Elton John said he shopped at there every Tuesday and that he “spent more money in Tower Records than any other human being.” One former employee said it best when she described Tower as a chain of independent record stores – meaning that the one you walked into felt like it was only one that existed because each store featured the individual flavor of the city and the people who worked there. Spec’s was the same way – there was nothing cookie cutter about those stores and the people who worked there were extremely knowledgable about, and genuinely loved, music.

Solomon was and still is a character and a brand all on his own, and was definitely the face of Tower throughout its existence. He went to NARM conventions, partied hard, and wanted his company to be the biggest retail record store chain in the world. As a result of his willingness to be the biggest and best, Tower expanded to Japan and became the first American company to open a retail store without a Japanese partner. Next was New York City, London, Singapore, Buenos Aires, and at its height Tower boasted 192 stores worldwide. But eventually the company began taking the same hits that Spec’s, and every other record store in America, did with big box stores selling CDs at cost and Napster giving music away for free. As we all know, ultimately digital music won and record stores shut down all over the country.