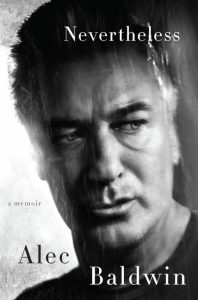 When I initially read about Alec Baldwin’s new memoir, Nevertheless, I assumed it would be funny. I guess it’s because the movies, television shows, and Saturday Night Live skits I’ve seen him in are funny. But, in chapter 13, he explains why he’s not funny when he talks about SNL writers: “My definition of funny changed while working with them. If people think I can say a line in a way that gets a laugh, I’ll take it. But I’m not funny. The SNL writers are funny…You’re only funny if you can write the material. What I do is acting.” Fair enough.

While Nevertheless wasn’t what I was expecting, a lot of it was interesting:

Throughout Nevertheless, Baldwin seems a bit pained as he recalls his childhood, drug and alcohol addiction, and acting career. There is an overall feeling of self-loathing that permeates the overall tone of the book. He spends a lot of time paying homage to fellow actors and actresses and talks about details of his craft which is definitely inspiring. However, when Baldwin discusses the horrible and threatening voicemail message he left for his daughter Ireland (who was 12 years old at the time) and what it did to his relationship with her, it’s clear that he is incredibly embarrassed of his behavior. And he should be. If you haven’t already heard that voicemail don’t listen to it. I did and the way he threatened his daughter at all, nevermind how young she was when he did it, is despicable. He’s lucky Ireland still speaks to him.

Baldwin also acknowledges his rocky relationship with and inevitable divorce from Kim Basinger. “Afterward, I was very careful to make a vital distinction between an excuse and an explanation in terms of my behavior.” Additionally, he talks about how he’s been to court several times for punching members of the paparazzi, and the reasons for doing so, which mostly consisted of him wanting to protect the privacy of his family. “It’s remarkable what a few trips to the dunk tank of American media can do for your soul.”

While some of the stories told in the book were gratuitous, I was impressed with his ability to describe and his generally thoughtful insight:

“I was nine years old and addicted to solitude.”

“Sports and games were the glue that held our neighborhood together.”

“The camera is the real star of every movie, and your first priority as a film actor is to get your relationship right with it…Otherwise it’s like painstakingly crafting a painting only to hang it on the wall backwards.”

A conversation he recalls having with his grandfather: “Why do you and I get along so well, Grandpa?” I’d ask. “Because we have a common enemy,” he’d reply.

He describes a building as having “very few trees and little character.”

“I realized I had an above-average empathy for other people’s feelings…I could understand other people, get inside them, better than most. I began to think that maybe this acting idea wasn’t such a bad decision after all.”

“Addiction forces you to a place of inevitability that must include overwhelming risk, shame, or death.”

“Before VCRs and DVDs, you had to pay attention.”

“College is the beginning of the merit-based period of people’s lives.”

On Mary-Louise Parker: “She was unpredictable. With her big eyes and lanky frame, you weren’t sure if she was a ballet dancer or a murder.”

On Jennifer Jason Leigh: “She was the best actress I’ve ever worked with – mostly because of her “unguarded intensity and her brave choices.”

“Once you abandon your instincts and begin polling people about your choices…it affects nearly every decision you make.”

“A risk-free life is not worth living.”

Towards the end of the book, Baldwin spends way too much time talking about politics. He discusses his respect for Barack Obama and Hillary Clinton and his disdain for Donald Trump. “The presidential candidate who defeats Trump in 2020 must present a clear, transparent plan for what he or she will do and when…It is imperative that we replace those who think they own this country with those who built it.”

Although the general tone of Nevertheless is a bit somber, Baldwin does end on a few hopeful notes:

“I love second chances. I love the concept of renewal. I love to see people come back from some adversity, self-inflicted or not, and untangle themselves from a difficult situation.”

“I haven’t been onstage as often as I would have liked, but my fondest memories live there.”

Somos un buen equipo is engraved in the wedding rings of Baldwin and his wife Hilaria. It means: “We are a good team.”

His final paragraph acknowledges this book was tough to write and that he hopes he was able to “entertain, motivate, and inspire” the reader. He ends by thanking those who read it.

You’re welcome Mr. Baldwin – it was an educational and unexpected journey.