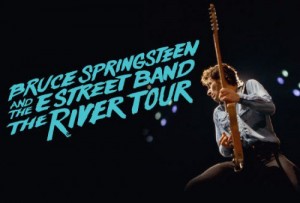 Earlier this month Bruce Springsteen announced that he was embarking on a six-week tour called “The River 2016” and his plan was to play his album The River, originally released in 1980, in its entirety. Although the album was his first number one LP and includes his first Top 10 hit, “Hungry Heart,” this seems like a bit of a cop out to me because The River isn’t exactly the first album that comes to mind when one thinks of the legendary rocker. Also, if I wanted to hear the entire album from start to finish shouldn’t I just listen to it via record player, iTunes or CD player? I get that he is celebrating the 35th anniversary of The River by releasing the boxed set titled The Ties That Bind: The River Collection (which became available on December 4, 2015) but artists release deluxe/boxed/special editions all the time and they don’t create a whole tour out of it.

Two more reasons this tour is so odd to me: 1) It’s not like Springsteen is scraping around for material – his discography spans 18 albums and over four decades for crying out loud! 2) Because The River is a double album I’m wondering if that mean audiences (who are paying big bucks to see a big name) won’t be hearing the hits that made The Boss famous? According to his January 19 set list, audiences will get at least one or two hits that aren’t on the album – for example Chicago’s United Center heard “Dancing in the Dark” and “Born to Run.” Either way, if I’m going to see Springsteen I want to hear an array of hits such as “Born in the USA,” “Glory Days,” and “Pink Cadillac” – among many others – not just one or two. All that being said, two days ago he added 14 additional dates to the tour so things must be going well.

While playing an album in its entirety is nothing new, I’m questioning if we are experiencing a resurgence. A few days ago Brian Wilson announced that, in celebration of the album’s 50th anniversary, he will be taking Pet Sounds on tour for “the final time” from March through October. Wilson commemorated the 40th anniversary of the album in 2006 when he performed Pet Sounds in sequence and then Roger Waters did the same with The Dark Side of the Moon from 2006 to 2008. Are artists going this route because albums are becoming more and more obsolete? With the exception of Adele’s 25, which threw a wrench at the notion that albums no longer matter by destroying every chart and album sales record in its path, it’s no secret that singles have gained popularity since the dawn of Napster and albums have continued to falter. So is this “old album” tour trend just a way to keep acts on the road without supporting a new album?

All of this being said, there are definitely a few albums I’d love to hear from start to finish in a live setting. How about, in no particular order: Guns N Roses’ Appetite For Destruction, Nirvana’s Nevermind, Jimi Hendrix’s Are You Experienced, No Doubt’s Tragic Kingdom, Led Zeppelin’s Led Zeppelin II, or Alanis Morissette’s Jagged Little Pill. Clearly Nirvana and Jimi Hendrix are out of the question and Led Zeppelin’s original drummer John Bonham passed away over 30 years ago, but there is still hope for the newly reunited Guns and of course No Doubt and Alanis.

It will be interesting to see if creating tours around playing full albums sets becomes a trend again. Will people shell out their hard-earned cash to hear these albums rather than a cross section of hits? Let’s watch Bruce and find out.